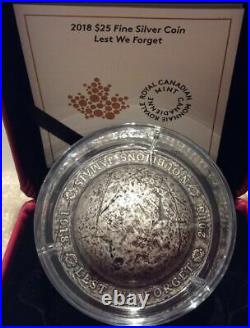 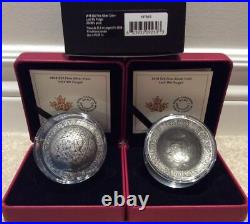 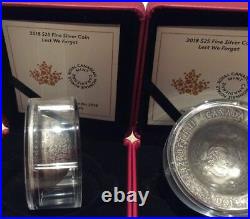 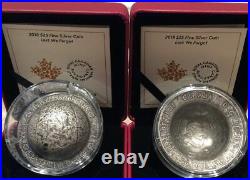 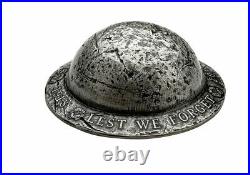 A FIRST: A helmet-shaped replica of a soldier’s Mark I steel helmet. On the 11th hour of the 11th day of the 11th month, the guns finally fell silent across the Western Front. The Armistice of 1918 signalled the end of a conflict that changed the world and claimed the lives of nine million combatants, including 66,655 Canadians. A century later, we honour the memory of all Canadians who served in the Great War with our most unusual shaped coin yet: a replica of a soldiers Mark I steel helmet. Your coins extreme curvature and antique finish leave a lasting impression, especially with added engraved touches that give the helmet a realistic, battle-worn appearance. ONE OF OUR MOST UNFORGETTABLE FIRSTS. Your coin is our first extreme curvature coin is an exceptional feat of craftsmanship, with a more deeply curved surface than any other concave- or convex-shaped coin. ONE HUNDRED YEARS LATER, CANADA HAS NOT FORGOTTEN. A century later, the Royal Canadian Mint commemorates the anniversary of the Armistice with its most unusual coin yet: a poignant symbol of remembrance shaped like the steel helmets worn by Canadian combatants in the First World War. Your coins antique finish gives an appropriately aged and distressed look, while the engraved cracks and markings complete the helmets battle-worn appearancea reminder of the reality of war and the hardships endured by those who fought and hoped for peace. A POWERFUL TRIBUTE TO COURAGE AND SACRIFICE. The small-scale replica of the steel helmet worn by Canadian soldiers in the First World War is a heartfelt tribute to their legacy, echoed in the poppy-flanked words engraved along the brim: LEST WE FORGET NOUBLIONS JAMAIS. Only 6,500 coins will be made worldwide. The Royal Canadian Mint certifies all of its collector coins. 1.5 OUNCE 99.99% PURE SILVER COIN. Resembling the 1916 Mark I model worn by Canadian combatants, your combat helmet-shaped coin is the result of a careful collaboration between Royal Canadian Mint engravers and engineers. Your coins unprecedented, extreme curvature allows for a realistic re-creation (on a much smaller scale) of the bowl-shaped headgear issued to Canadian troops and all British Empire forces in 1916. The reverse provides a view of the top of the now-iconic steel helmet, whose battle-worn appearance is the result of engraved cracks and markings beneath the antique finish that gives it all a distressed look. Along the brim that helped protect soldiers from airborne debris, the heartfelt assurance LEST WE FORGET NOUBLIONS JAMAIS is flanked by engraved poppies, while the double dates 1918 and 2018 mark the centennial of Armistice. The obverse features the effigy of Her Majesty Queen Elizabeth II by Susanna Blunt engraved deep in the recessed circular crown, while the legend and face value are engraved on the brim. The Mark I steel helmet was the standard-issue headgear of the Canadian troops during the Great War but not until 1916. France was the first to mass-produce steel headgear designed for this modern war, having introduced the M15 Adrian helmet in 1915. A design patented by John L. Brodie (hence the name Brodie helmet) soon offered a few advantages over the French model, namely a streamlined construction from a single sheet of strong Hadfields steel; it, too, would be superseded by the improved Mark I model distributed to British Empire forces in 1916. Deeper than Brodies original design, the Mark I had a two-part liner, a rolled rim and a less reflective finish to allow a measure of camouflage. The helmet was produced by British manufacturers and issued in late winter 1916 to Canadian troops, who welcomed the now-iconic headgear in spite of the added equipment weight of 950 grams of steel. In 1914 and much of 1915, Allied troops typically went into combat without any protective headwear, only their standard-issue fabric caps. Production of the Mark I helmet was limited at first, with only 1 in 5 Canadian soldiers equipped by March 1916. Initially, helmets were kept in the forward trenches for use by the soldiers occupying the sector; by the end of 1916, every Canadian soldier had been issued a Mark I helmet of his own. Another example of modern equipment developed for this modern war, the Mark I helmet served as the basic design for all steel helmets worn by Canadian forces until the mid-20th century. Its domed shape was retained for the wider Mark II helmet of the Second World War, and later variants like the Canadian Helmet (Mark III), which was issued to our troops for D-Day. From 1921 until 1931, Armistice Day and Thanksgiving were celebrated on the same day: the Monday prior to November 11. On March 18, 1931, a motion was introduced in the House of Commons to designate November 11 solely as Armistice Day, and a proposed amendment to change the name to Remembrance Day to emphasize the memory of the soldiers. Canadas first Remembrance Day took place on November 11, 1931. Your coin is encapsulated and presented in a Royal Canadian Mint-branded maroon clamshell with a black beauty box. A symbol of soldiering, an ultimate representation of bravery. The item “1.5 oz. Pure Silver Coin Lest We Forget Mintage 6,500 (2018)” is in sale since Tuesday, March 2, 2021. This item is in the category “Coins & Paper Money\Coins\ Canada\Commemorative”. The seller is “khdavo” and is located in Pickering. This item can be shipped worldwide.