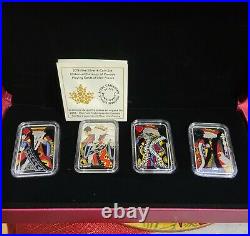 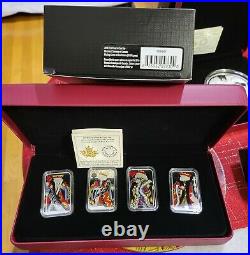 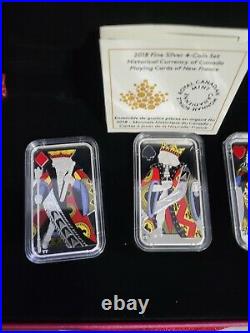 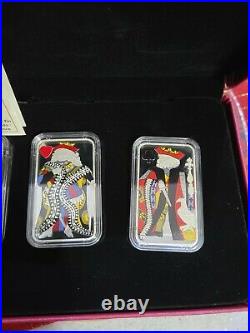 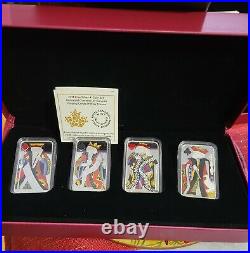 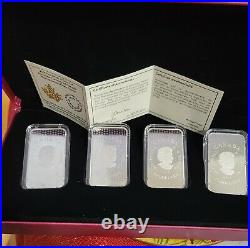 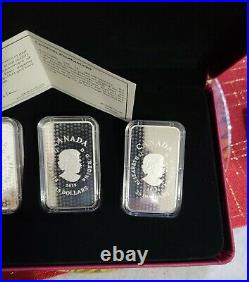 Pure Silver Coloured Coins X4: Playing Cards of New France – COA 298/ 1250 RARE BNIB. Beaver pelts, strings of beads, and wheat have all been used as legal tender in Canada’s early history-but so too have playing cards. Masterfully engraved and colourized, your four-coin collectible reaches into history to bring an unusual form of currency right to your fingertips. All four of your 1.5 oz. Pure silver coins are shaped just like 18th-century playing cards! AN HOMAGE TO CURRENCY HISTORY! Your 4-piece coin set is a card-shaped tribute to an unusual currency that circulated in New France. It’s a fascinating glimpse of Canada’s early past-one that gives a sense of the challenges and shortages faced by a growing colony. INSPIRED BY THE PAST! The four original designs were inspired by the 18th-century Lionet and Provence Pattern of court cards, with small details that reflect the period style. HISTORICALLY ACCURATE RECTANGULAR SHAPE! In the 17th and 18th centuries, playing cards did not have rounded corners-and neither do your rectangular coins. A TOTAL OF SIX OUNCES OF SILVER! Your 4-coin set includes four 1.5 oz. Pure silver coins, each one masterfully engraved and crafted in 99.99% pure silver, plus full colour on the reverse! INCLUDES A MINT-BRANDED DECK OF CARDS! Your 4-coin set comes with a free Royal Canadian Mint-branded set of playing cards! Together, this card-and-coin pairing reflects the popularity of card games, now and then! Your 4-coin set includes a serialized certificate. Limited to 1,250 coins worldwide. The four rectangular coins in your set are 99.99% pure silver. Each one measures 28.6 millimetres wide by 49.8 millimetres long, and has a nominal metal weight of 47.34 grams (1.5 ounces). All four rectangular coins bear original art by artist Trevor Tennant, who drew inspiration from the 18th century Lionet and Provence Pattern of court cards. Each reverse mimics the period style of the playing cards that were used as currency in New France. It features full colour over the engraved depiction of a King from one of four suits: spades, hearts, diamonds and clubs. The King of Clubs (Alexander the Great) is a confident king who holds a dagger-like sword in his right hand, and a sceptre in his left. The King of Spades (the biblical David) wears a full-length, fur-lined robe. He holds a sword in one hand and in the other, an orb that signifies having the world in one’s hand. The King of Hearts (Charlemagne) wears a cloak edged with a scarf-like pattern, while the fleur-de-lis (a symbol of the French monarch) is visible throughout. The King of Diamonds (Julius Caesar) holds an authoritative baton in one hand, and in the other, a sceptre that symbolizes imperial power. The obverse on each coin features a repeating pattern of the four suit symbols and the effigy of Her Majesty Queen Elizabeth II by Susanna Blunt. The history of a historical currency. Unable to delay payments, Jacques de Meulles, the intendant of New France, came up with a creative solution. But the temporary measure became a recurring one. In fact, counterfeiting was viewed as a serious threat: in 1690, a resident was convicted of the crime and sentenced to be flogged, fined, bonded into service, and banished from Quebec City. Each of your four coins are encapsulated and presented individually in a Royal Canadian Mint-branded maroon clamshell case with graphic beauty box. Discover one of the most unique currencies in Canadian history! Composition 99.99% pure silver. Weight (g) 47.34. Diameter (mm) 49.80 mm x 28.60 mm. Face value 25 dollars. Artist Trevor Tennant (reverse), Susanna Blunt (obverse). This item is in the category “Coins & Paper Money\Coins: Canada\Commemorative”. The seller is “funcanadiancoincc” and is located in this country: CA. This item can be shipped to Canada, United States.