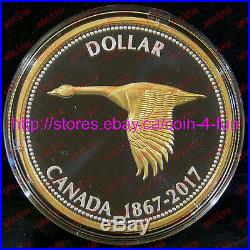 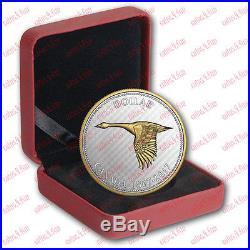 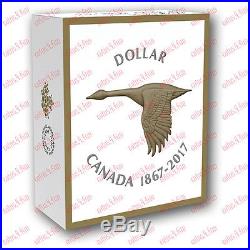 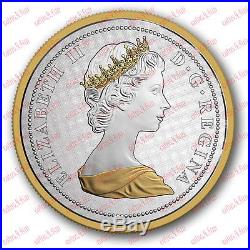 Store Category: Big Coin Series: Alex Colville. 2017 – Big Coin Series: Alex Colville Designs – 1 Dollar – Pure Silver Coin. First Coin in Series. The Canada goose seems appropriate for the dollar since it is one of our most majestic creatures and is particularly Canadian. There are other associations with traveling over great spaces, and a kind of serene dynamic quality in this bird. Designed by acclaimed Canadian artist Alex Colville, the. Circulation coins remain a powerfully symbolic representation of the Canadian spirit, even as the nation celebrates its 150th anniversary. This elegant commemorative series of 5 oz. Fine silver coins begins with a re-creation of the 1967 one-dollar coin, which has been beautifully enhanced with selective gold plating. A gorgeous gift for someone who enjoys Alex Colville’s 1967 centennial circulation coins! FIRST COIN IN NEW SERIES! Your coin is the first in an unforgettable series that celebrates Canada’s 150th anniversary and the 50th anniversary of the 1967 Canadian Centennial circulation coins. BOTH SIDES OF YOUR COIN FEATURE SELECTIVE GOLD PLATING! Never before have these iconic designs been featured in 99.99% pure silverand on a much larger scale (65.25-mm diameter)uniquely enhanced with stunning gold plating selectively applied to the reverse and obverse. The proof finish is gorgeously enhanced with modern polishing techniques that highlight the meticulous engraving of each subject. INCLUDES SECOND EFFIGY OF HER MAJESTY QUEEN ELIZABETH II. For added historical authenticity, the obverse features the second effigy of Her Majesty Queen Elizabeth II, as it appeared on the original coins. THIRD BIG COIN SERIES TO FEATURE ICONIC CANADIAN CIRCULATION COINS! Your coin is 65.25-mm in diameter, an impressive size that highlights the beautiful design. 5-OUNCE 99.99% PURE SILVER COIN! Your coin is GST/HST exempt! LOW MINTAGE: Only 2,150 coins will be made available worldwide. Your coin re-creates the unforgettable 1967 one-dollar circulation coin design by Canadian artist Alex Colville, and features the side profile of a Canada goose in flight. Detailed engraving re-creates the goose’s features and the texture of its flight feathers, as it flaps its wings downwards while soaring over this land. The image is enhanced by the application of selective gold plating over the goose and along the rim. The obverse features selective gold plating on the second effigy of Her Majesty Queen Elizabeth II by Arnold Machin. Your coin is encapsulated and presented in a Royal Canadian Mint-branded maroon clamshell with a graphic beauty box. 99.99% pure silver. Alex Colville (reverse), Susanna Blunt (obverse). I do leave feedback for everyone. The item “1867-2017 Big Coin Alex Colville Designs Goose 5 OZ $1 Pure Silver Dollar Canada” is in sale since Tuesday, September 27, 2016. This item is in the category “Coins & Paper Money\Coins\ Canada\Commemorative”. The seller is “coins.4.fun” and is located in Richmond Hill, Ontario. This item can be shipped worldwide.