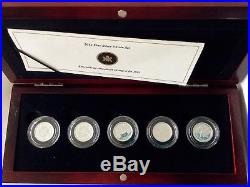 2012 CANADA 1-CENT FAREWELL TO THE PENNY SILVER 5-COIN SET. The year 2012 marks the end of production of Canada’s 1-cent piece. To celebrate the penny’s long history, the Royal Canadian Mint is offering a series of commemorative pennies rendered in exquisite alloy and finishes. Each of the five coins in this exceptional commemorative set of five Canadian 1-cent coins is certified to be 99.99% pure silver. This unique set celebrates the evolution of Canada’s penny from its first striking at the Royal Mint in Ottawa (later the Royal Canadian Mint) in 1908 to the 1-cent coin’s final striking at the Royal Canadian Mint’s Winnipeg branch in 2012. The reverse features the maple wreath design that had been present on Canadian 1-cent coins since the Victorian era, framing a central field featuring the words’ONE CENT’ and the year of production. The obverse features the effigy of King Edward VII. At the same time, a new reverse design featuring the word’CANADA’ was introduced. The obverse continued to feature the effigy of King George V, though complications in 1936 caused by the abdication of King George V’s successor, Edward VIII, led the Mint to modify the 1936 dies in order to produce never-circulated George V’dot cents’ in the event of a delay in production of 1937 coinage. 1967: To celebrate Canada’s centennial, Canadian artist Alex Colville created a special commemorative reverse design for the penny featuring a rock dove in flight. This shape was maintained until 1997, when the penny became round again until its final striking in 2012. The obverse has featured four different effigies of Her Majesty Queen Elizabeth II since 1953. The effigy introduced in 1990, which appears on the coin in this set, was the first to be created by a Canadian: Dora de Pedery-Hunt. This unique set features all Penny’s reverse designs throughout the Canadian history until the Penny’s last year in 2012 (including a special design by Alex Colville to commemorate Canada’s Centennial in 1967). All coins are in fine silver; No GST! Coins packaged in a custom wood case and beauty box created specifically for the 2012 Farewell to the Penny. Please contact me if you have any questions and concerns. The item “2012 CANADA 1-CENT FAREWELL TO THE PENNY SILVER 5-COIN SET” is in sale since Sunday, March 25, 2018. This item is in the category “Coins & Paper Money\Paper Money\ World\North & Central America\Canada\Bank of Canada”. The seller is “zmlbil-lcdnl6sh” and is located in Delta, British Columbia. This item can be shipped to Canada.