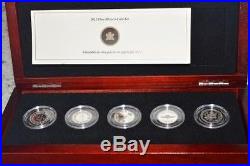 2012 Canada Farewell to the Penny – Fine Silver 5 Proof Coin Set. Fine Silver 5 Coin Set 2012! – FAREWELL TO THE PENNY. Mintage is Limited to 5,000 sets worldwide but, according to the Royal Canadian Mint Annual Report for 2012, only 2,817 sets were produced!!! Comes with a serialized certificate of authenticity and wooden presentation box. On January 2, 1908, Countess Alice Grey, wife of Canadas ninth Governor-General, Albert Henry George Grey, struck Canadas first domestically produced coin: a 1-cent piece. In 1911, the ascension of George V to Englands throne necessitated a change in the sovereign effigy on the obverse of Canadian coinage. In 1920, The Royal Mint introduced a new design for the penny, created by Fred Lewis, featuring two maple leaves flanking the words ONE CENT beneath the word CANADA on the coins reverse side. Seeking to modernize the appearance of Canadian coinage, the Royal Canadian Mint introduced G. Kruger-Grays iconic maple leaf twig design, which remained the pennys reverse image every year (except 1967) until 2012. To celebrate Canadas centennial, famed Canadian artist Alex Colville created a special commemorative set of coin designs for 1967. In an effort to make it easier for the visually impaired to distinguish between coin denominations, the shape of the maple leaf twig penny was altered from perfectly round to 12-sided. The round design was reintroduced in 1997 and the penny remained round until its last year of production. Celebrate the history of the penny with your beautiful 5-coin fine silver set that features original penny designs. Special features: A FIRST! This unique set features all the pennys reverse designs throughout Canadian history until the pennys last year in 2012 (including a special design by Alex Colville commemorating Canadas Centennial in 1967). 5-coin penny set, each 1/10 ounce of fine silver (99.99% pure)! Certificate includes detailed history of the penny. Each coin has a 1 cent denomination, 2.94 g in weight, with a diameter of 19.1 mm. Design: Each coin in your 5-coin set features a design from years past from different artists: Small leaves design originally by George W. Small leaves design originally by W. Two maple leaves design originally by Fred Lewis. Centennial design originally by Alex Colville. Maple twig design by G. All coins are embossed with the words 1 CENT and the year 2012. Packaging: Your coin set is packaged in a custom wood case and beauty box created specifically for the 2012 Farewell to the Penny. Create listings that get noticed! With Auctiva’s 1,800+ Templates. Track Page Views With. Auctiva’s FREE Counter. The item “2012 Canada Farewell to the Penny Fine Silver 5 Proof Coin Set” is in sale since Friday, April 21, 2017. This item is in the category “Coins & Paper Money\Coins\ Canada\Commemorative”. The seller is “coinhutt” and is located in Bradford, Ontario. This item can be shipped to Canada, United States.