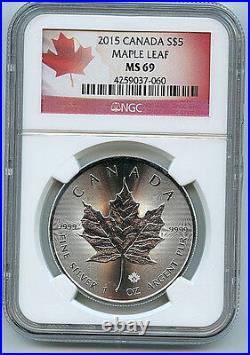 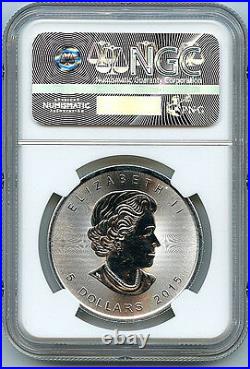 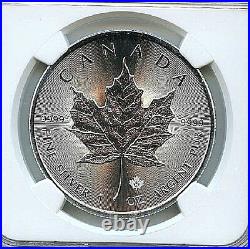 2015 Canadian Silver Maple Leaf Graded MS69 by NGC. Coin is bright, clean, with very sharp detail, and a bright shine on the field. 9999 Silver Maple Leaf coin is certified MS 69 by NGC grading service. An ongoing issue with Maple Leaf coins is the development of milk spots from the improper cleaning of the coin before being struck at the mint. While a coin may appear clear at the minting and after grading, the coin may develop the spots years later. While our coins may have been clear in 2015 they may develop spots. Canadian Silver Maple Leaf coins are one of the most beautiful Silver coins in the world. They have both investor and collector appeal for their. 9999 fine Silver content and elegant design. The 2015 Silver Maple Leafs feature a unique light diffracting pattern of radial lines, making the coins harder to duplicate and providing another measure of security. Some of the unique features include a privy mark on the reverse and radial lines which make counterfeiting the coins nearly impossible. Like all previous coins, the 2015 Canadian Silver Maple Leaf will be minted in 1 troy ounce of. Due to then purity of this coin (softer) and security features (Radial lines) finding high grade coins is more difficult than most bullion coins. Note: Due to the counterfeiting artifacts in the coin, the scanner picture will show refraction patterns and moire effects. The actual coin is bright silver with proof like features. Mint: Royal Canadian Mint. Purity: 99.99% Silver. Thickness: 3.29 mm. The Canadian Silver Maple Leaf is the flagship silver bullion coin produced each year by the Royal Canadian Mint. The primary image on the 2015 coin features an intricately detailed maple leaf, with every detail easily visible. On the opposite side of the coin, the effigy of Her Majesty Queen Elizabeth II is again featured as it is on numerous other coins designed by the mint each year. The image of Queen Elizabeth is based upon a 2003 rendering by Canadian portrait artist Susanna Blunt. On the reverse side of the 2015 Silver Canadian Maple Leaf is the brand new maple leaf design. Above the image, the word Canada is stamped in all capital letters with an upward arch. There is a dual purity stamp of. 9999 on either side of the maple leaf image. Below the image, the metal content of the coin is featured. On the obverse side, Blunts image of Queen Elizabeth II is featured with the words Elizabeth II and 5 Dollars 2014 stamped above and below her portrait. Add Me to Your Favorite Sellers. Search For Items At American Icons Collectibles Search titles and descriptions. The item “2015 Canadian Maple Leaf $5 Silver Dollar MS69 NGC. 9999 Graded Coin B3″ is in sale since Tuesday, April 14, 2015. This item is in the category “Coins & Paper Money\Coins\ Canada\Other Canadian Coins”. The seller is “amricons” and is located in West Sacramento, California. This item can be shipped worldwide.