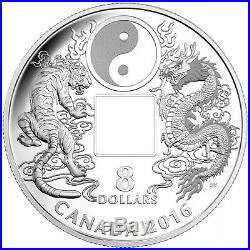 Locked in their ancient battle positions, the Tiger and the Dragon struggle for dominanceequal and opposing forces, yin and yang. This exquisitely designed 99.99% pure silver coin, featuring a square hole pierced through its centre, celebrates the ageless story of these two mythic powers. The Royal Canadian Mints second holed coin since 2007is beautifully designed and engraved using traditionalChinese imagery and motifs on both its reverse andobverse sides. The elaborate design by Canadian artist Charles Vinh hasbeen produced in painstaking detail by Royal CanadianMint engravers using multiple finishes. The coin prominently features the auspicious number 8amplifying good luck for the year 2016, itself a multipleof this number of good fortune. Highly limited mintage of 6,888 coins means that this lucky piece is sure to be sought after by collectors. Makes a beautiful and thoughtful gift or token of goodfortune and a unique addition to any collection featuringChinese imagery, specialized coins, nature themes, andChinese-Canadian cultural motifs. DESIGN The reverse design by Canadian artist Charles Vinh features the image of a tiger and a dragon locked in battle. At the centre of the coin is a square holea traditional motif used in Chinese minting to represent the Earth and the national landmass. Above the hole, the stylized yinyang symbol, created through the use of different finishes, underscores the coins central theme. This symbol is surrounded by elemental flames. On the left side of the image, the Tiger, its back to the viewer and its face turned in profile to the Dragon on its right, crawls in typical defensive stance amid stylized scrollwork. On the right, the Dragon is presented in profile, facing the Tiger to its left. Its claws are raised and its scale-covered body coils to attack. The obverse design, also by Charles Vinh, features two elaborately carved phoenixesfittingly associated with the feminine, the Empress, and the Queen when juxtaposed with the Dragon featured on the reverse of the coin. The phoenixes flank each side of the central square hole, above which is the effigy of Her Majesty Queen Elizabeth II by Susanna Blunt. The effigy is engraved within a smooth polished circle that is detailed on each side with stylized scrollwork. This scrollwork is continued in elaborate detail on the bottom half of the obverse field. The item “2016 $8 FINE SILVER COIN TIGER AND DRAGON YIN AND YANG” is in sale since Friday, November 30, 2018. This item is in the category “Coins & Paper Money\Coins\ Canada\Commemorative”. The seller is “westedmontoncoinandstamp” and is located in Edmonton, Alberta. This item can be shipped to Canada, United States.