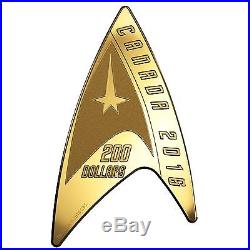 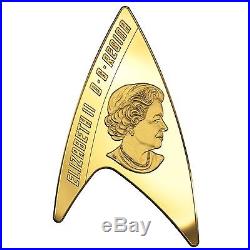 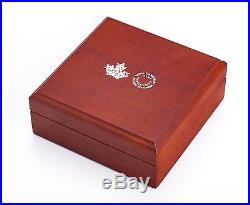 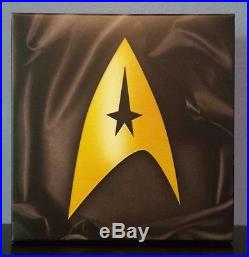 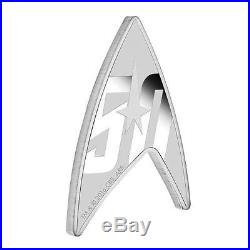 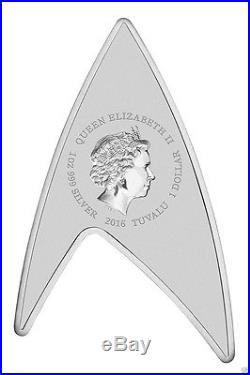 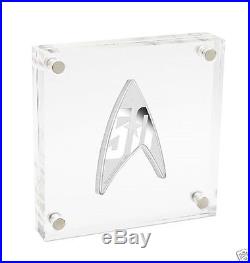 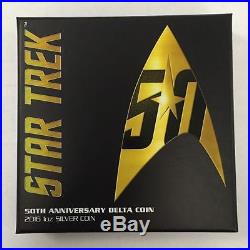 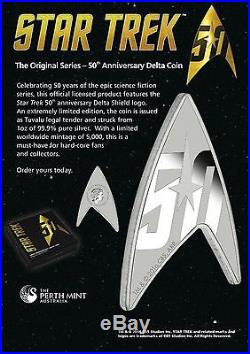 Canada To Issue Worlds First Delta Shaped Coin To boldly go where no man has gone before or perhaps in this case To boldly go where no Mint has gone before. Reflecting the gold tone of the original series insignia, the Delta Shield featured on this 99.99% pure gold coin displays the elongated star symbol which identified crew assigned to Command. Available as of September 6, 2016, this exclusive collectible is limited to a low mintage of 1,500 coins. No strangers to time distortions, engine shutdowns, transporter malfunctions and even hostile takeovers, the U. S Enterprise (NCC-1701) and her crew exemplified resilience in the face of adversity. Their encounters with “new life and new civilizations” stirred the imaginations of Canadians young and old, while their acts of courage, compassion and diplomacy typified humanity’s noble idealsboth in their time and ours. Star Trek and its hopeful vision for our future are represented by a powerful symbol: the delta-shaped Starfleet insignia worn by all U. S Enterprise personnel, including Captain James T. Kirk (played by Canadian actor William Shatner). This iconic emblem is widely recognized, even beyond the realm of fandom; it embodies hope for a future where humanity has come together as one, where we are part of a broader community that stretches across the stars. For many fans, the insignia serves as a powerful visual reminder of just how far our imaginations could take us, and much of what we can aspire to learn and become. This coin will be the centerpiece of your display for years to come! Special Features: Take the helm with this Starfleet Command insigniapart of our 50th anniversary of the Star Trek television series, which is beloved by many Canadians and credited with inspiring innovation in our time! This is the world’s first delta-shaped coin: Unique engraving techniques recreate the smooth, arrowhead-shaped insignia that has become associated with the U. S Enterprise, Starfleet, and the Star Trek universe! The past meets the presentand the future: Cutting-edge technology recreates a classic design to produce a truly timeless collectible. Crafted from 99.99% pure gold with a very low mintagea one-of-a-kind collectible that will shine in your collection. An official licensed product approved by CBS Studios. Design: Detailed engraving and contrasting finishing instill this unusually shaped coin with an inspiring, nostalgic feel. Its arrowhead shape mimics that of the iconic Delta Shield Insignia, which was worn by the crew of the U. Enterprise and became the identifying emblem of Starfleet. The Starfleet insignia is the Enterprise’s patch, which was later adopted by Starfleet and worn by all members in recognition of the crew’s five-year mission. A different Starfleet insignia was featured in the episodes Charlie X and The Omega Glory. S Enterprise falls under the authority of Starfleet, which is itself under the authority of the United Federation of Planets. Early episodes referenced United Earth Space Probe Agency (UESPA) (Charlie X, Tomorrow Is Yesterday) before Starfleet was established as the authority in command of the Enterprise (Court Martial). Other terms included Star Service (The Conscience of the King), Spacefleet Command (The Squire of Gothos) and even Space Central (Miri). Starfleet’s responsibilities include exploration, research, defence in space and diplomacy. During first contacts, Starfleet officers have the authority to act as official representatives of the Federation. Specifications: Mintage: 1500 Composition: 99.99% pure gold Finish: proof Weight (g): 16.2 Diameter (mm): 28.68 (H) x 17.50 (W) Edge: plain Certificate: serialized Face value: 200 dollars Artist: CBS (reverse), Susanna Blunt (obverse). To boldly go where no man has gone before. SILVER DELTA – STAR TREK: THE ORIGINAL SERIES – 50th ANNIVERSARY – 2016 1 oz Pure Silver Coin. Star Trek: The Original Series 50th Anniversary 2016 1oz Silver Proof Coin from The Perth Mint, featuring: Official Licensed Product Proof Quality 99.9% Pure Silver Iconic Star Trek 50th Anniversary Delta Shape Limited Edition 5,000 Display Packaging Numbered Certificate of Authenticity SILVER DELTA – STAR TREK: THE ORIGINAL SERIES – 50th ANNIVERSARY – 2016 1 oz Pure Silver Coin – Perth Mint! CELEBRATING 50 YEARS OF STAR TREK The Perth Mint is thrilled to offer fans this Star Trek 50th anniversary collectible coin. Gene Roddenberrys Star Trek debuted in 1966, and ran for three seasons until 1969. Set in the future, the science fiction series followed the 23rd century adventures of Captain James Tiberius Kirk and the Constitution-class starship U. Enterprise NCC-1701, a powerful interstellar spacecraft dispatched by the Earth-based Starfleet Command to explore the Galaxy. The coin is struck by The Perth Mint from 1oz of 99.9% pure silver. DESIGN: The coin is shaped like the Star Trek 50th Anniversary Delta Shield. The coins reverse features the 50th Anniversary Delta Shield logo. The coins obverse depicts the Ian Rank-Broadley effigy of Her Majesty Queen Elizabeth II, the monetary denomination, the coins weight and fineness, and the 2016 year-date. PRESENTATION: This coin is housed in a contemporary acrylic display case within a themed, customized shipper and is accompanied by a numbered Certificate of Authenticity. SPECIFICATIONS: Country: Tuvalu Face value: 1 Dollar Year: 2016 Metal: Pure Silver (99.99%) Weight: 1oz Size: 360.5mm x 39mm Thickness 3.5mm Quality: Reverse Proof Mintage: 5000 Certificate COA: Yes Box: Yes. The item “2016 Canada $200 Delta Gold Coin and Tuvalu $1 Star Trek 1 oz Silver DELTA Coin” is in sale since Friday, October 14, 2016. This item is in the category “Coins & Paper Money\Coins\ World\Commemorative”. The seller is “kiemss” and is located in Edmonton, AB. This item can be shipped worldwide.