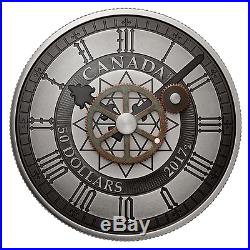 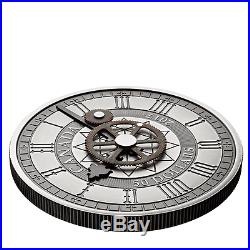 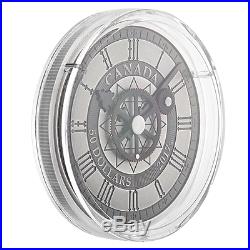 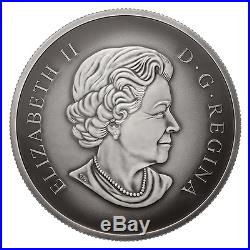 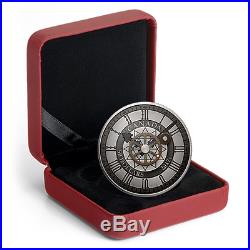 2017 CANADA 150 PEACE TOWER CLOCK 90TH ANNIVERSARY 5oz. Br and new coin in the original mint package. At the stroke of noon on July 1, 1927, the Peace Tower Clock and Carillon made their timely debut as Canadians celebrated Confederation’s Diamond Jubilee. Ninety years later, this commanding timepiece and its copper-clad apex remain the pride of Canadaa symbol of its political heart, and a national icon whose prominence is second only to our flag! Time marches on high atop the 92.2-metre tower on Parliament Hill, where the four clock faces continue to mark the passage of time for an entire nationin tragedy and in our finest hour. A PIECE OF ART AND A MINT FIRST! Celebrate the 90th anniversary of an iconic timepiece: the Peace Tower Clock. The two ­ gears are made from oxidized copper that originally clad the roofs of the Parliament Buildings. Your coin is a tangible piece of Canada’s architectural historyright in the palm of your hand! NO TWO COINS ARE QUITE ALIKE! To preserve its historical value. The copper has not been melted down. Any colour variations or markings occurred naturally during its time on the roofs of Parliament Hillthey also help to make each coin unique! A GLIMPSE AT THE INNER WORKINGS! Both gears have the same number of teeth as their real-life counterparts. AN AGED LOOK AND FEEL! Applied by hand, the coin’s antique finish enhances the precision engraving and gives it an aged look that reflects 90 years of history! The Royal Canadian Mint certifies all of its collector coins. Your coin is crafted from five ounces of 99.99% pure silver with a stunning diameter of 65.25 mm! The reverse design by Canadian artist Calder Moore features an antique finish that brings an aged elegance to this depiction of the Peace Tower Clock. Precision engraving re-creates one of the four identical faces that grace each side of the iconic clock tower, which rises up high above Parliament Hill in Ottawa, Ontario. The Roman numerals, minute markers and geometric-inspired centre pattern are all beautifully and faithfully reproduced on the reverse; in fact, the only engraved addition is the widening of the centre’s circular frame to include the engraved words “CANADA”, the year “2017” and the face value, “50 DOLLARS”. The clock’s hands are attached to the centre of the coin, and provide an immobile base for the two gear wheels that provide a glimpse at a clock’s inner workings. They are exact replicas of two of the clock’s gears, albeit on a smaller scale: the larger wheel has 90 teeth while the smaller pinion has 32. For added historical value, these cogs are fashioned from copper that once clad the roofs of Canada’s Parliament Buildingsany colour variations or markings have been preserved to make each coin unique. The obverse features the effigy of Her Majesty Queen Elizabeth II by Susanna Blunt. Your coin is encapsulated and presented in a Royal Canadian Mint-branded maroon clamshell with a black beauty box. 99.99% pure silver. Calder Moore (reverse) , Susanna Blunt (obverse). PLEASE LET ME KNOW IF THERE IS A PROBLEM BEFORE GIVING YOUR FEEDBACK. Thank’s for looking. The item “2017 CANADA 150 PEACE TOWER CLOCK 5oz. PURE SILVER COIN” is in sale since Saturday, August 5, 2017. This item is in the category “Monnaie\Pièces – Canada\Commémoratif”. The seller is “2830philip” and is located in Montréal, QC. This item can be shipped worldwide.