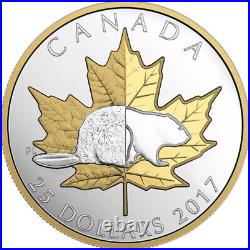 The Royal Canadian Mint reflects on a nation’s 150-year journey-and beyond-through the fusion of two iconic symbols that continue to inspire admiration by proudly representing all that is Canada. DESIGN The reverse design by Canadian artist Pierre Leduc carries great meaning on this 150th anniversary of Confederation, by paying tribute to Canada’s evolving history through the two foremost national icons. A transition marks the centre of the field, with classic depictions on the left to represent the nation’s past (1867), and more contemporary versions on the right to represent both the present (2017) and beyond. Both icons are resplendent in selective gold plating. Foremost is the beaver, the industrious mammal that is symbolizes Canada’s sovereignty. Its tail and back half are texturally detailed, as it has appeared on previous coin designs, while the front portion transitions into a stylized silhouette that offers a more modern take on this Canadian icon. Behind it is the iconic maple leaf, whose serrated edges and deeply veined lobes are fixtures throughout the design. The left features a more natural and life-like appearance that evokes the reverse of the beloved Silver Maple Leaf (SML) coin, while the right portion places a strong emphasis on symmetry and conveys a sense of strength. SPECIAL FEATURES – A FIRST for the Royal Canadian Mint: a selectively gold-plated, fine silver piedfort coin! – A distinctly Canadian celebration: Two proud national symbols combine to represent Canada’s past, present and future in one outstanding design. The design fuses traditional imagery with contemporary depictions of long-standing Canadian icons: the beaver and the maple leaf. The reverse features an outstanding level of detail-as seen in the texture of the beaver’s fur and the maple leaf’s veins. The use of selective gold plating adds elegance and an extra layer of dimension that allows the maple leaf, the rim and the Her Majesty Queen Elizabeth II be admired individually, or collectively as part of the overall design. A powerfully artistic way of paying tribute to Canada’s progression since its political birth 150 years ago! This item is in the category “Coins & Paper Money\Coins: Canada\Commemorative”. The seller is “gatewestcoins” and is located in this country: CA. This item can be shipped to Canada, United States.