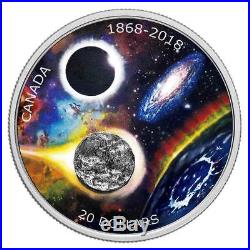 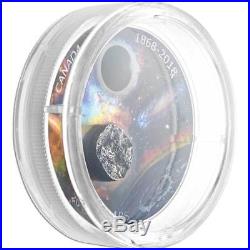 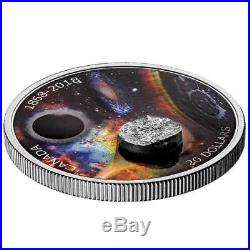 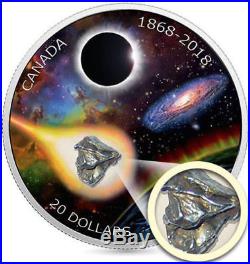 OUT OF THIS WORLD COIN. Founded in 1868, The Royal Astronomical Society of Canada (RASC) has nurtured the passion of astronomers while fostering the curiosity of anyone who has ever looked up at the stars and wondered what lies beyond. We are celebrating the 150th anniversary of the RASC with an awe-inspiring (and scientifically accurate) reverse design that adds a photo-realistic twist to the Societys sesquicentennial logo! To top it all off, the design includes an authentic meteorite fragment, which is a fitting tribute to the contributions of RASC members. Own an extraterrestrial piece of our solar systemone that is potentially as old as Earth itself! YOUR VERY OWN METEORITENO TWO PIECES ARE ALIKE! A real piece of meteorite makes a big impact on your coinsince no two pieces are alike, no two coins are alike making your coin unique! CELEBRATING CANADAS SCIENTIFIC SPIRIT! A special 150th anniversary celebration of The Royal Astronomical Society of Canada! Through the contributions of its 5,000 members, Canadas leading association of amateur and professional astronomers remains dedicated to the advancement of astronomy and related sciences. SOURCED FROM THE CAMPO DEL CIELO METEORITE FIELD! Your coin includes a GUARANTEED authentic meteorite fragment! Sourced from the Campo del Cielo meteorite field, your meteorite fragment likely made impact some 4,500 years ago, but it was originally part of an iron mass that is likely billions of years old. INCLUDES SERIALIZED CERTIFICATE: The Royal Canadian Mint certifies all of its collector coins. PURE SILVER: Your coin is crafted from 99.99% pure silver! LOW WORLDWIDE MINTAGE: Only 5,500 coins will be made available worldwide. Designed by Alexandra Lefort, your coin is a re-interpretation of The Royal Astronomical Society of Canadas sesquicentennial logo in a scientifically accurate, photorealism art style. The original logo features stars that allude to Canadian contributions to stellar spectroscopy and photometry, and a globular cluster that honours the scientific work of Helen Sawyer Hogg and Canadas cooperative partnerships; both are colourfully re-imagined here as the Eagle Nebulaspecifically the pillars of interstellar gas and dust known as the Pillars of Creation, where the formation of new stars is a symbolic representation of the RASCs beginnings (and by extension, its anniversary). A fixture in RASC public outreach efforts, the Moon was chosen to represent the lunar calendars of the First Nations peoples, and the navigational astronomy that guided many European discoverers during Canadas early history. Beneath it, the Andromeda galaxythe nearest major galaxy to our ownis a symbolic ode to Canadian contributions to cosmology. Blazing as it burns through Earths upper atmosphere, the depiction of a meteor is topped by a genuine iron meteorite fragment sourced from the Campo del Cielo meteorite fields, where the impact craters date back an estimated 4,500 years. Both the meteorite and the view of the Manicouagan crater in Quebec are a nod to the RASCs longstanding interest in the study of planet geology, meteor dynamics and impact cratering, and to the excellence of Canadian research in these fields. Always fascinating, the space-weather phenomenon of the aurora borealis adds a True North flourish that a design that encapsulates 150 years of exploring the cosmos. The reverse also includes the word CANADA, the double commemorative dates 18682018, and the face value 20 DOLLARS. The obverse features the effigy of Her Majesty Queen Elizabeth II by Susanna Blunt. Front and center on your coin, the extraterrestrial piece of our solar system was sourced from the Campo del Cielo meteorite field in Argentina, where a large fragment was first documented in 1576. A polycrystalline coarse octahedrite, the IA iron meteorite was recovered from one of 26 impact craters formed roughly 4,500 years ago, when a shower of metallic meteorites dispersed fragments across an area of roughly 320 square kilometres. The typical composition of a Campo del Cielo meteorite is 92.7% iron, 6.15% nickel, 0.42% cobalt, 0.37% carbon and 0.28% phosphorus. Your coin is encapsulated and presented in a Royal Canadian Mint-branded maroon clamshell with a black beauty box. The stunning design on your coin resonates with all who share a passion for astronomy! 99.99% pure silver. (reverse), Susanna Blunt (obverse). The item “2018-150th Anniversary of the RAS of Canada $20 1oz Silver Proof Meteorite Coin” is in sale since Sunday, July 1, 2018. This item is in the category “Coins & Paper Money\Coins\ World\Commemorative”. The seller is “kiemss” and is located in Edmonton, AB. This item can be shipped worldwide.