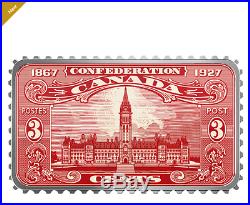 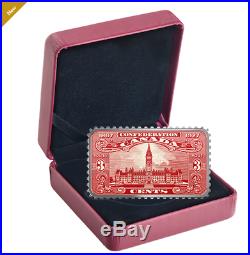 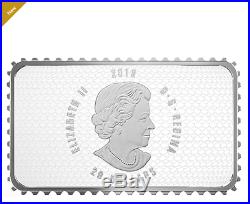 Canadas first stamp-shaped coin! A brand-new, unused, unopened, undamaged item in its original packaging (where packaging is applicable). This FIRST coin in a limited series! A limited work of art! Only 5,000 coins available worldwidehighly collectible! Canadas postal past is lined with philatelic gems that are a pictorial journey through time! The Royal Canadian Mints Canadas Historical Stamps series is a numismatic tribute to early 20th century stamp designs, with colourful reproductions engraved within the perforated edges that transform this rectangular coin into a stamp-shaped one. Canadas first stamp-shaped coin. With serrated edges that mimic a postal stamps perforations, this fine silver coin is a numismatic celebration of Canadas postal and philatelic history, with a special focus on early 20th century stamp designs. The classic look of a bygone era. This FIRST coin in a limited series travels back in time to 1927 to reproduce a stamp issued for Canadas Diamond Jubilee. The engraved reproduction of the 1927 stamp is just as detailed as the original complete with horizontal lines that were the product of intaglio printing, or line engraving, one of the oldest methods of stamp production. The addition of colour over engraving completes this reproduction of the original brown carmine-coloured stamp. Forever preserved in 99.99% pure silver, this collectible is the perfect gift for philatelists and numismatists alike. Engraved on the stamp-shaped reverse is a detailed reproduction of a Canadian postal stamp issued on June 29, 1927, to commemorate Canadas Diamond Jubilee. Titled Centre Block of the Parliament Buildings, the original design by Herman Herbert Schwartz and engraved by Harold Osborn, features a front view of the Peace Tower and Centre Block building on Parliament Hill, in Ottawa. The three-cent stamp was printed using the traditional intaglio printing or line engraving method, as evidenced by the horizontal lines re-created on the reverse. An application of modern colour mimics the brown carmine hue of the original issue, while the double dates 1867 and 1927 and the word CONFEDERATION reflect the 60th anniversary of Confederation. Like the 1927 stamp, the reverse includes ornamental flourishes and the word CANADA on a scroll banner, along with the bilingual POSTES / POST and the face value, represented by the number 3 and the word CENTS. The obverse features the effigy of Her Majesty Queen Elizabeth II by Susanna Blunt. Designed by Sir Sandford Fleming in 1851, the Three-Pence Beaver is Canada’s first stamp and one of the world’s earliest pictorial stamps. The first perforated stamp was issued in 1858. The rows of holes or “teeth” made it easier to separate individual stamps from a sheet, which were previously hand cut by postal clerks. Herman Herbert Schwartz designed many Canadian stamps issued between 1927 and 1954, including a collector favourite: the Bluenose in 1929. Schwartz also designed one of the first Canadian stamps to feature Her Majesty Queen Elizabeth II, issued in 1953. Prior to 1967, many of Canada’s stamps were the product of an engraving process. Like a coin, each design was engraved to scale (in reverse) on a master die, followed by a test run of trial prints known as die proofs. ” Once approved, the die was hardened and copied to a “transfer roll, which impressed hundreds of copies of the design onto a metal plate that would print the sheets of stamps. A total of three plates of 200 stamps each were used to print the stamp re-created on the reverse. Your coin is encapsulated and presented in a Royal Canadian Mint-branded maroon clamshell with a black beauty box. Composition 99.99% pure silver. Weight 31.86 g. Diameter 51 mm x 30 mm. Packaging Maroon clamshell with black beauty box. Finished size 88 mm x 88 mm. The item “2018 $20 FINE SILVER COIN CANADA’S HISTORICAL STAMPS PARLIAMENT BUILDING 1927″ is in sale since Tuesday, July 24, 2018. This item is in the category “Monnaie\Pièces – Canada\Commémoratif”. The seller is “alexsilvercoins” and is located in Verdun. This item can be shipped worldwide.