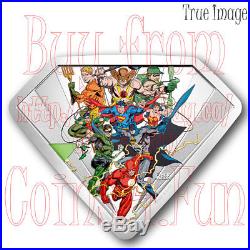 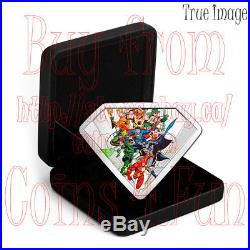 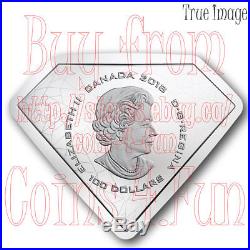 Store Category: DC Comics Originals. In one of its most recognizable incarnations! And morethis is the way many Canadian fans remember them, as they appeared in the pages of comic books published in the 1970s to mid-’80s. These Golden Age characters were revitalized in the Silver Age, when they rode a wave of mainstream success. But in the Bronze Age of DC Comics, our Super Heroes were confronted with the realities of. World and they suddenly seemed more human to us than ever before. Was the era in which comic books grew up. It all culminated in an industry-changing event that marked the end of all three eras before it, where worlds lived, worlds died. Nothing will ever be the same. Shaped like the symbol of truth and justice for all, your 10 oz. 99.99% pure silver coin is a special Bronze Age retrospective, with all-new art by the Canadian all-star team of DC Comics artist Jason Fabok and colourist Brad Anderson. Your stunning showpiece is a treat for the fans from start to finish! Add this gorgeous 10 oz. Pure silver DC Comics coin to your comic book collection today! ALL-NEW ART BY DC COMICS ARTIST JASON FABOK AND COLOURIST BRAD ANDERSON! Your coin celebrates Canadian comic book artists as it includes all-new art by Jason Fabok and colourist Brad Andersontwo of the many Canadian comic book artists making waves in today’s comic book industry. A special look back at the Justice League from the Bronze Age of DC Comics, using modern-day artistry to breathe new life into the classic art style. THE RETURN OF SUPERMAN’S SHIELD! This stunning showpiece is shaped just like Superman’s S-Shield, a near-universal symbol that is synonymous with hope and justice for all. FIRST APPEARANCE of Green Arrow and Green Lantern on our coins! The Royal Canadian Mint certifies all of its collector coins. Most of these are serialized certifications, meaning that each certificate is given a unique number, starting at 1. Your coin was meticulously crafted in 10 oz. 99.9% pure silver. Limited to just 750 coins worldwide. And your coin is GST/HST exempt! Your coin is a modern-day tribute to the past and features an original concept by Canadian comic book artist Jason Fabok, with colours by Brad Anderson. Within the confines of this S-Shield coin, the members of the. Seem poised to make the leap from their Bronze Age adventures to this modern era. From left to right, the colourful all-star team-up includes. , who leads the rush with his lightning-fast speed. The obverse features the effigy of Her Majesty Queen Elizabeth II by Susanna Blunt. The Bronze Age introduced viewers to the multi-issue story arcs that have become the standard in today’s comic books. Lost his fortune then teamed up with. For an unusual cross-country adventure, which brought them face-to-face with the social issues of the 1970s. Didn’t have his own comic book title during the Bronze Age, but he made their presence known in many team-ups and as a vocal member of the. A magnificent gift or addition to your 10 oz. Pure silver or DC Comics collection! 99.99% pure silver. 110 mm x 87.5 mm. Jason Fabok and Brad Anderson. (reverse), Susanna Blunt (obverse). I do leave feedback for everyone. The item “2018 The Bronze Age of DC Comics 10 OZ $100 Pure Silver Diamond-Shaped Coin” is in sale since Tuesday, July 31, 2018. This item is in the category “Coins & Paper Money\Coins\ Canada\Commemorative”. The seller is “coins.4.fun” and is located in Ontario. This item can be shipped worldwide.