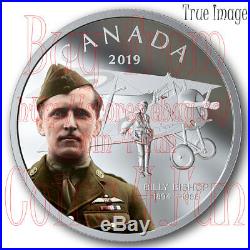 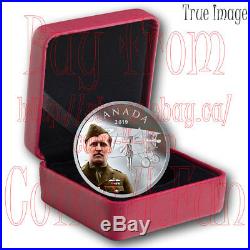 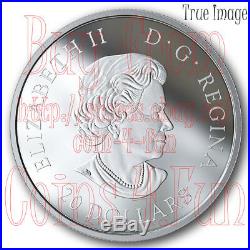 Store Category: World Wars. Fighter planes were all-new during the First World War. In March 1917, a young pilot who would become Canadas top flying ace took to the air. Billy Bishop, born on February 8, 1894 in Owen Sound (Ontario), was 23 years old when he downed his first German plane on his first mission. By the end of the War, he had 72 victories to his credit, ranking only third behind the 80 claimed by Manfred von Richthofen, Germanys legendary Red Baron. Collect our first-ever coin featuring Billy Bishop! This is our first coin to honour Billy Bishop, Canadas famous flying ace of the First World War. TRUE CANADIAN WARTIME MEMORABILIA! Your coin features archival photographs that have been meticulously reproduced as intricate engravings and a beautiful colour portraitan innovative combination of two technologies. Your coin features the plane that Billy Bishop flew on his historic solo raid of June 2, 1917 (a Nieuport 17 that he affectionately called Little Daisy). THE DAWN OF THE AVIATION AGE! This stunning tribute to a pilot and his plane embodies all the excitement at the dawn of the aviation age, its revolutionizing impact on military warfare, and the daring young men who made it possible. A GREAT CANADIAN WAR HERO! Your coin is a must-have keepsake of a great Canadian war hero and the first Air Force recipient of the Victoria Cross! The Royal Canadian Mint certifies all of its collector coins. Your coin is crafted from one ounce of 99.99% pure silver. Your coin features Billy Bishop standing with his first plane, a Nieuport 17 that he affectionately called Little Daisy. Royal Canadian Mint engravers reproduced archival photographs to create this design. The effigy of Her Majesty Queen Elizabeth II by Susanna Blunt with 20 DOLLARS and ELIZABETH II D. REGINA engraved along the outer edge of the coin is featured on your coins obverse. Billy Bishops best-known feat is his daring solo raid of June 2, 1917. He destroyed three German planes and sent a fourth one into retreata victory that earned him the first Victoria Cross to ever be awarded to the Air Force. Fighter planes of the First World War were built of canvas and wood. Top speeds were 160 KPH. It was a major achievement to fly 16 km into enemy territory. There were no parachutes on board. If a plane caught fire, it was unlikely the pilot would survive. Billy Bishop perfected the game of chicken. He would fly straight at his enemy and refuse to move. Then, at the last possible moment, he would send a shower of bullets into the enemys engine before swerving out of the way. In his book, Winged Warfare, Billy Bishop wrote, It was the mud, I think, that made me take to flying. After arriving in France, the author found himself up to his knees in mud on a stormy July day. When a plane landed and took off nearby, I knew there was only one place to be on such a dayup above the clouds in the summer sunshine. Billy Bishops contributions continued through the Second World War. As an Honorary Air Marshal he played a key role in recruiting for the Royal Canadian Air Force and drew worldwide attention to the RCAF and to the British Commonwealth Air Training Plan. Your coin is encapsulated and presented in a Royal Canadian Mint-branded maroon clamshell with a black beauty box. 99.99% pure silver. (reverse), Susanna Blunt (obverse). I do leave feedback for everyone. The item “2019 Billy Bishop (1894-1956) $20 1 OZ Proof Pure Silver Coloured Coin Canada” is in sale since Sunday, January 27, 2019. This item is in the category “Coins & Paper Money\Coins\ Canada\Commemorative”. The seller is “coins.4.fun” and is located in Richmond Hill, Ontario. This item can be shipped worldwide.