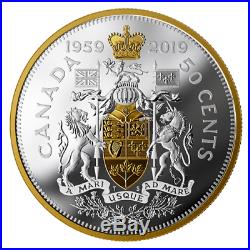 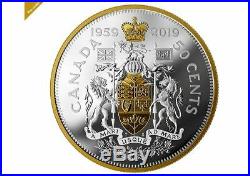 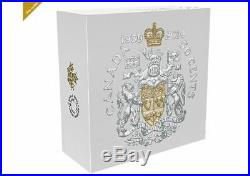 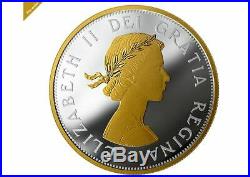 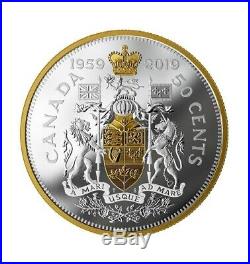 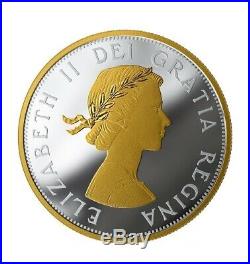 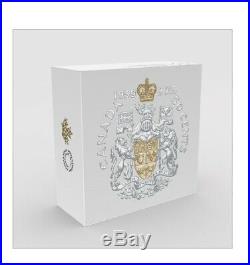 2019 Exclusive Masters Club 2 oz. Pure Silver 1959 Half Dollar. In 1957, Canada amended the coat of arms it had been using since 1921. Canadian artist Alan Beddoe was tasked with revising the arms to reflect two elements preferred by Canadas new monarch, Her Majesty Queen Elizabeth II: the use of St. Edwards Crown in place of the Tudor crown and a change of leaf colour from green to red. Beddoes revision was recreated two years later for the half-dollar (which has traditionally featured Canadas coat of arms) by the Mints Master Engraver at the time, Thomas Shingles. Hurry and order yours today! A MASTERS CLUB EXCLUSIVE! A collectible retrospective on the story of Canadas half-dollar! This 60th anniversary piece re-creates the 1959 issue of Canadas 50-cent coinand it is only available to our Masters Club members! 2 OUNCES OF FINE SILVER! Nearly double the diameter of the original issue, this commemorative half-dollar is meticulously crafted in an impressive 2 ounces of 99.99% pure silver! Selective gold plating adds a touch of elegance to the Arms of Canada on the reverse, the effigy on the obverse, and the rim that frames the mirror-like proof finish! HISTORY ON TWO SIDES! The obverse design features the uncrowned effigy of Her Majesty Queen Elizabeth II by Mary Gillick, as it appeared on the original proof dollar. Her Majesty image is selectively gold plated. Your coin is ready to display in its limited-edition wooden case and comes beautifully packaged in an attractive graphic beauty box. The Royal Canadian Mint certifies all of its collector coins. Your coin is GST/HST exempt. Your coins design features former Royal Canadian Mint Chief Engraver Thomas Shingles rendition of Alan Beddoes 1957 redesign of the Canadian coat of arms. The shield is selectively gold plated. The design features the words CANADA and 50 CENTS and the dates “1959” and “2019”. Canadas coat of arms symbolizes our national sovereignty. This symbol is used by Government departments, agencies, Cabinet ministers, and the Prime Minister, as well as politically independent federal bodies like courts, the Canadian Armed Forces, and the Royal Canadian Mounted Police. The coat of arms also appears on the Great Seal of Canada. Beautifully presented in a Royal Canadian Mint branded wooden box, lined with black flocking and including a removable insert and special certificate compartment. 99.99% pure silver. Proof with selective gold plating. Thomas Shingles (reverse), Mary Gillick (obverse). The item “2019 CANADA MASTERS CLUB HALF DOLLAR 60TH ANNIVERSARY 99.99% PURE SILVER COIN” is in sale since Wednesday, February 20, 2019. This item is in the category “Coins & Paper Money\Coins\ Canada\Commemorative”. The seller is “kiemss” and is located in Edmonton, AB. This item can be shipped worldwide.