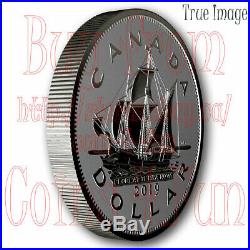 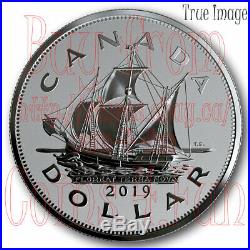 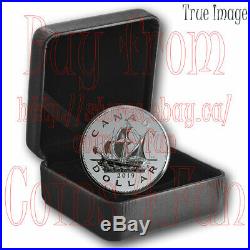 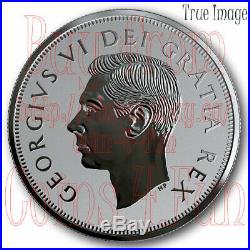 2019 – Heritage of the Royal Canadian Mint: The Matthew – Pure Silver Proof Piedfort Dollar. Widely considered to be one of our most beautiful commemorative pieces, the 1949 silver dollar is re-imagined as a brilliant uncirculated, pure silver. Tribute to those who helped forge a legacy! LOOK BACK ON OUR PAST! Like pages from our history, a past commemoration is an opportunity to explore the heritage of the Royal Canadian Mint and thank all the people who contributed to its history, from engravers to the production floor. HIGHLIGHTS A DECADE OF CHANGE IN CANADIAN COINAGE! Coin is twice the thickness of a typical cointhat means double the amount of 99.99% pure silver. This piece also has a brilliant uncirculated finish, much like the original. AS FINELY ENGRAVED AS THE ORIGINAL PIECE! With the exception of an updated date (2019), the reverse is identical to the original design by Thomas Shingles, who hand-carved the image in miniature. FEATURES A HISTORICAL EFFIGY! The Royal Canadian Mint certifies all of its collector coins. 99.99% PURE SILVER COIN! Except for the updated date 2019, your coin is a reproduction of Thomas Shingles original design for a commemorative silver dollar issued in 1949, to mark Newfoundlands entry into Canadian Confederation (March 31, 1949). It features a detailed rendering of the. Beneath the water lies the Latin inscription FLOREAT TERRA NOVA (May the New Found Land Flourish). The obverse features the effigy of King George VI by T. As he had done with the Victory Nickel, Shingles prepared the master tooling for the 1949 Newfoundland Commemorative dollar entirely by hand in the span of just five weeks, carefully carving the design in miniature directly onto the steel matrix. Shingles retired in 1965 but continued to work as an artist, and won the design competition for a 1971 silver dollar that marked the centennial of another provinces entry into Confederation: British Columbia. Ours is a rich history that goes back to 1908. Thousands of people have been behind everything weve done; in fact, for every coin weve produced, hundreds of members of our Mint family have worked hard for that end result. I love to look back on that history, to acknowledge all who came before me and to thank them for paving the way. Jamie Desrochers, Product Manager, Royal Canadian Mint. Commemorative coins werent common practice in Canada until the 1960s. Previous to that time, the dollar was the denomination of choice. Most designs were reduced to scale for engraving. In 1949, the typical method was to create a large model of the coin design first, then reduce it using a pantograph engravernot so for the 1949 silver dollar, which showcases Thomas Shingles outstanding skills as an artist and engraver. The 1949 dollars were struck from selected dies to ensure a superior finish. Packaged in plastic or cardboard tubes of 20 to minimize abrasions, the coins entered circulation in late June 1949, with the first ones sent to Newfoundland. Some 1949 dollars were struck in 1950. Due to demand, the decision was made to continue striking the coin in 1950 while retaining the 1949 date. An additional 40,718 pieces were struck in 1950, for a total combined mintage of 672,218. Your coin is encapsulated and presented in a Royal Canadian Mint-branded clamshell with a black beauty box. 99.99% pure silver. Thomas Shingles (reverse), Susanna Blunt (obverse). I do leave feedback for everyone. The item “2019 Matthew Heritage of Royal Canadian Mint $1 Pure Silver Piedfort Dollar Coin” is in sale since Monday, June 17, 2019. This item is in the category “Coins & Paper Money\Coins\ Canada\Commemorative”. The seller is “coins.4.fun” and is located in Richmond Hill, Ontario. This item can be shipped worldwide.