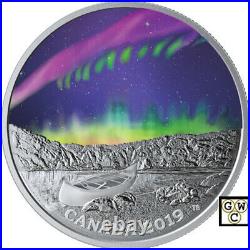 Pure Silver Coin -‘Steve': Sky Wonders 3-Coin Series. It appears as a thin arc of light running across the night sky, like a violet pathway to the heavens. The rarity of this nighttime display is enough to take one’s breath away. Your coin forever showcases the sky phenomenon known as’Steve’, a rare wonder that was discovered right here in Canada! The reverse design by Tony Bianco features a nighttime scene in early fall. Above the engraved lakeside campsite, the aurora borealis is enhanced by a touch of neon colour, which vividly brings the’Steve’ phenomenon to life under UV light. The obverse features the effigy of Her Majesty Queen Elizabeth II by Susanna Blunt. Many times while camping I’ve observed the aurora borealis. It is so much more impactful on a quiet lake with a campfire. Steve’ is a rare sight and very unique in its presentation, with strange green colours often accompanying it. I wanted to make it the star in an already astonishing show. Steve’ was largely un-documented until 2016, when members of the Alberta Aurora Chasers brought it to the attention of the scientific community. The phenomenon is related to what’s known as a sub-auroral ion drift, and it happens when charged particles in the atmosphere flow at extreme speeds. Until recently, it was frequently photographed but little understood. As scientists continue to unravel the mystery of’Steve,’ the story of its discovery highlights the contributions made by amateur skywatchers everywhere. While the aurora borealis can appear in the north whenever the sky is clear and dark,’Steve’ is thought to occur just a few times each year. This bright band of gas occurs separately from the aurora; it typically stretches in an east-west direction over hundreds of kilometres, and may be visible in the sky for up to an hour. The phenomenon’s name started out as a light-hearted reference to a movie in which a character named an unknown object’Steve. A physicist later proposed the backronym STEVE for’Strong Thermal Emission Velocity Enhancement,’ which is how the phenomenon has come to be known. Your coin is encapsulated and presented in a Royal Canadian Mint-branded clamshell with a black beauty box. Composition 99.99% pure silver. Weight (g) 31.39. Face value 20 dollars. Artist Tony Bianco (reverse), Susanna Blunt (obverse). This item is in the category “Coins & Paper Money\Coins: Canada\Commemorative”. The seller is “gatewestcoins” and is located in this country: CA. This item can be shipped to Canada, United States.