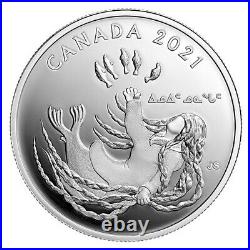 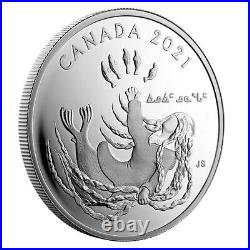 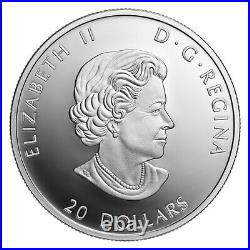 Celebrate Indigenous storytelling and the art of gifting knowledge. For the First Peoples of Canada, relaying an age-old story is a lesson in itself – and that is the focus of our new. In repeating legends and myths, one generation sets an example for the next one, entrusting them with tales that are now theirs to tell and move forward through time. The first story comes from Inuit Nunangat, where. (“myths” in Inuktut) play an important role in the transmission of knowledge and values. Depicted on this 99.99% pure silver coin, the well-known legend of the Sea Goddess continues to inform new generations and inspire artists such as Jason Sikoak, who designed this coin. Carry on the tradition – cherish and share these stories that have been passed down through generations. Order Coin #1 today! Series celebrates the art of gifting knowledge through the stories of the First Peoples of Canada. Issued annually, each coin travels to a different region of Canada to highlight a legend that has been told and retold since time immemorial. The first legend comes from the four regions of Canada that are collectively known as Inuit Nunangat, which is indicated on the coin’s reverse???? It is the tale of a beautiful Inuk who became the Sea Goddess and mother of all marine mammals after she was tossed into the ocean. This is our first collaboration with Nunatsiavut artist Jason Sikoak, who designed your coin’s reverse. A TRADITION OF SHARING! In oral tradition, there is the expectation that the listener will share the story with others – and we encourage collectors to do the same with these coins. By combining Indigenous stories and art, this series is our way of honouring Indigenous storytellers and the role they play in sharing traditional knowledge with new generations. Crafted from 99.99% pure silver, your coin has a limited mintage of 5,000 worldwide. The Royal Canadian Mint certifies all of its collector coins. Designed by Nunatsiavut artist Jason Sikoak, your coin’s reverse highlights a widely known legend from Inuit Nunangat. , the homeland of Inuit in Canada. It is the story of the Sea Goddess, also known as Nuliajuk; tossed into the ocean, the long-haired Inuk becomes half-woman and half-fish as she slips deeper beneath the waves, while her fingers take the form of seals that represent all marine mammals. The obverse features the effigy of Her Majesty Queen Elizabeth II by Susanna Blunt. The Sea Goddess is an important figure in Inuit mythology and Angakkuuniq (shamanism). She is an ambivalent force that may provide or take away all the necessities of life. She was so feared, Inuit dared not say her name out loud. Now she is coming back in art, oral histories and scholarship, and she continues to show us the creativity and resilience of Inuit culture. Sharon Angnakak, Archivist, Nunavut Department of Culture and Heritage, Heritage Division. The Legend of the Sea Goddess. Nuliajuk was a beautiful girl who had refused many offers of marriage. One day, a young hunter arrived at her father’s camp; dressed in warm furs, he spoke in a soft voice and promised to provide Nuliajuk with a good home and animals for food and clothing. He kept his face hidden under his hood but Nuliajuk was sufficiently impressed with him, and she agreed to marry him. When she arrived at her new home on a remote island, Nuliajuk discovered that her husband was not a man but a bird. Cold and hungry, she cried out for her father to come save her. But as she and her father paddled away, they were caught in a strong wind created by the bird’s furious wingbeats. Fearing for his life, Nuliajuk’s father threw her over the side of the umiak. She tried to save herself by holding on, but her father cut off her fingers and she fell into the water. As she sank to the bottom of the ocean, her fingers and hands took the form of different marine mammals and she became the Sea Goddess. Hunters came to depend on her goodwill: when humans transgress the laws of nature, the Sea Goddess keeps her children (the sea animals) away, and the Angakkuq (shaman) must appease her by combing her hair. This is just one version of the legend, which may differ from region to region. The Sea Goddess is known by many different name across the four Inuit regions of Canada (Inuvialuit, Nunavik, Nunatsiavut, Nunavut) that are collectively known as Inuit Nunangat. There are also different versions of her story – in one version, she marries a dog after rejecting other suitors. The Sea Goddess is a central figure in Inuit oral history and she continues to inspire artists today. Intergenerational learning plays an important role in maintaining cultural continuity in Inuit Nunangat, which has the youngest population in Canada – the median age is just 24. Your coin is encapsulated and presented in a Royal Canadian Mint-branded clamshell with a black beauty box. 99.99% pure silver. Jason Sikoak (reverse), Susanna Blunt (obverse). This item is in the category “Coins & Paper Money\Coins: Canada\Commemorative”. The seller is “ha2117″ and is located in this country: CA. This item can be shipped worldwide.