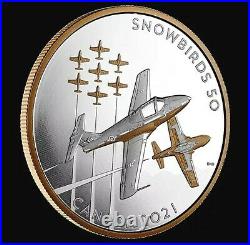 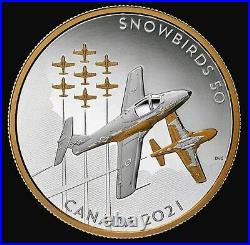 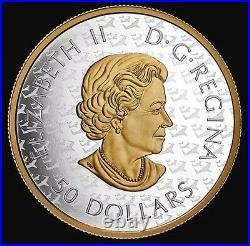 Canada’s aerial ambassadors celebrate 50 years! Formed in 1971 to demonstrate the skill, professionalism and teamwork inherent in the Canadian Forces, the Snowbirds carry on a proud tradition of aerial excellence that dates back to the early years of powered flight in Canada. Their eminent predecessors include aerobatic teams such as the Royal Canadian Air Force’s (RCAF’s) first official aerobatic team in 1929, the Siskins, followed by many others including the Blue Devils, Sky Lancers, Red Knight, Golden Hawks and Golden Centennaires to name a few. In the post war years prior to unification in 1968, the Royal Canadian Navy (RCN) also formed several aerobatic teams including the Seafire Exhibition Flight and Grey Ghosts. The true significance of the Snowbirds and the legacy they represent can be measured in the hearts and minds of the millions of Canadians who turn their heads skyward year after year to marvel at the team’s grace and precision as they weave their aerial magic across the nation. They continue to be proud ambassadors for the men and women serving in all branches of the Canadian Armed Forces while paying tribute to the thousands of personnel, both military and civilian, who have contributed to their overwhelming success and popularity across North America. The Royal Canadian Mint is honoured to salute the Snowbirds ams they celebrate their 50th anniversary in 2021. HONOURS AN AVIATION LEGACY. The Snowbirds are world-renowned for the precision and grace of their thrilling aerobatic show set to music. This Snowbirds coin salutes a legacy of aerobatic team prowess that dates back over 90 years in Canada. THE CANADIAN DESIGNED AND BUILT CT-114 TUTOR. Your coin features the diminutive Canadair Tutor jet trainer that has been the mount of the Snowbirds since their inception. In the mid-1960s Canadair built 190 Tutors for service in the RCAF and Canadian Forces. THE SOLOS AND DOUBLE DIAMOND FORMATION. Your coin features the team’s two solo aircraft, Snowbirds 8 and 9, splitting away from each other with the remaining seven-plane “Double Diamond” formation in a vertical climb in the background. It is from these two basic elements that the Snowbirds build their integrated display that features precision aerobatic formation manoeuvres interspersed with the breathtaking head-on aerobatics by the two solos. The Royal Canadian Mint certifies all of its collector coins. Your coin is crafted from five ounces of 99.99% pure silver and enhanced with selective gold plating. Your coin was designed by Canadian graphic artist Dave O’Malley, inspired by a photograph of the Snowbirds taken by Canadian aviation photographer and publisher Mike Reyno. It features a highly-detailed view of the topside of Snowbird 9 and bottomside of Snowbird 8 revealing the signature “speedbird” design that was introduced by the team in 1974. The engraved “SNOWBIRDS 50″ salutes the 50th anniversary of the team in 2021. This unique coin also features beautiful gold plating on both sides designed for the exclusive collector. The effigy of Her Majesty Queen Elizabeth II by Susanna Blunt with “ELIZABETH II”, “D·G·REGINA” and “50 DOLLARS” engraved along the outer edge of the coin is featured on your coin obverse, along with a pattern on the field of a repeated design element taken from the official Snowbirds 50 logo. Project initiative, production liaison and historical text were provided by former Snowbird commander and team leader Dan Dempsey. The genesis of the Snowbirds took place in early 1971 when the Base Commander of CFB Moose Jaw, Saskatchewan, Colonel O. Philp, decided to form a seven-plane airshow team to carry on the legacy of the Golden Centennaires which he had commanded in 1967 during Canada’s Centennial Year. Initially flown by instructors at 2 Canadian Forces Flying Training School, the team expanded to nine aircraft in 1972 and soon competitive tryouts were held for pilot volunteers from across Canada, such was the popularity of the new team. The Snowbirds were granted permanent status as a new squadron in the Canadian Forces on April 1, 1978 when they officially became known as 431 (Air Demonstration) Squadron. Snowbirds pilots are all volunteers, as are the majority of the squadron’s technicians and support staff. Competitive flying tryouts are carried out each year to select new team pilots, with half of the team normally changing each year. Over the years, squadron members have represented every province in Canada and all of Canada’s services – the RCAF, RCN, Canadian Army and the Reserves. Over 150 million spectators across North America have watched a live performance by the Snowbirds over the last 50 years in some 2,700 official airshows at 380 different towns and cities. Hundreds more flypasts have been flown at every major outdoor event in Canada, from Canada Day on Parliament Hill to the Olympics to the Grey Cup. During their typical six-month airshow season, Snowbirds team members will attend three to four public relations events per week, signing thousands of autographs over the course of the season. The team has a long established tradition of never leaving an autograph session until every person has received a signed brochure. As role models for the youth of Canada, they have proven particularly adept at motivating and inspiring children through school and hospital visits, encouraging them to stay in school, avoid drugs and pursue their dreams, whatever they may be. The Snowbirds are official ambassadors for the CHILD Foundation (children with intestinal and liver disorders), flying a special show for them every summer. Your coin is encapsulated and presented in a Royal Canadian Mint-branded black clamshell with a black beauty box. Composition99.99 % pure silver with selective gold plating. Weight (g)157.6. Diameter (mm)65.25. ArtistDave O’Malley (reverse), Susanna Blunt (obverse). Packaged safely and handled with care. Comes with tracking for the buyers and sellers protection! Catering to your international needs with top customer service! Ships NEXT DAY always. The item “2021 Canada 5 oz. Pure Silver Coin The Snowbirds A Canadian Legacy BRAND NEW” is in sale since Tuesday, June 22, 2021. This item is in the category “Coins & Paper Money\Coins\ World\Commemorative”. The seller is “dollar.deala” and is located in Markham, Ontario. This item can be shipped worldwide.