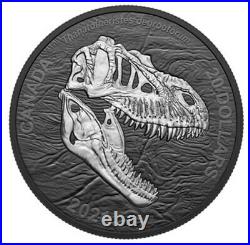 Unveiled in 2020, Thanatotheristes degrootorum is the first new tyrannosaur species discovered in Canada in over 50 years. This “Reaper of Death” was identified thanks to fossil fragments found along the Bow River in Alberta. Its toothy skull is depicted on the reverse of our Discovering Dinosaurs coin, where black rhodium plating highlights a fossil find that shed new light on our prehistoric past. It’s the perfect coin for the dinosaur lover in your family. YOUR DINO COIN FOR 2021! Calling all fossil hunters! Imagine unearthing a new dinosaur species-that’s the idea behind this coin design, where the engraved rock formation represents the thrill of discovery. On your coin’s reverse, black rhodium plating represents the hidden or unknown past. This dark design element keeps the focus on the engraved fossils that have helped paleontologists piece together the story of prehistoric Canada. The fossil depicted on your coin has been verified for scientific accuracy by the Royal Tyrrell Museum of Palaeontology. FOR DINO LOVERS OF ALL AGES! Dinosaurs are a popular theme with collectors and Canadians of all ages. They’re also an important part of Canada’s natural heritage. The Royal Canadian Mint certifies all of its collector coins. Designed by Canadian paleoartist Julius Csotonyi, the reverse features the fossilized skull of Thanatotheristes degrootorum, a tyrannosaur species recently discovered in Canada. Beneath the black rhodium plating, the engraved rock texture represents the formation in which the fossil fragments were found. The obverse features the effigy of Her Majesty Queen Elizabeth II by Susanna Blunt. Composition: 99.99% pure silver. Weight: 31.39 grams. Your coin was designed by paleoartist Julius Csotonyi, who was the first to illustrate Thanatotheristes degrootorum. 79.5 million years old, Thanatotheristes degrootorum is one of the oldest known tyrannosaurids – it even pre-dates the fearsome Tyrannosaurus rex by 12 million years! The imposing meat eater on this coin was identified thanks to fossil fragments found in 2008 by a local farmer and his wife while walking along the Bow River in Alberta. And by comparing the fossils to those of other known tyrannosaurs, experts say the toothy Thanatotheristes would have been about eight metres (26 feet) long! Your coin is individually encapsulated and presented in a Royal Canadian Mint-branded clamshell with a black beauty box. This item is in the category “Coins & Paper Money\Coins: Canada\Commemorative”. The seller is “gatewestcoins” and is located in this country: CA. This item can be shipped to Canada, United States.