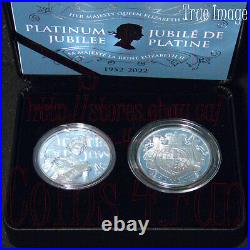 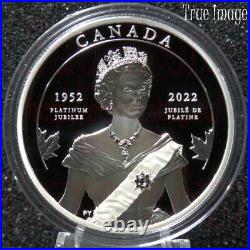 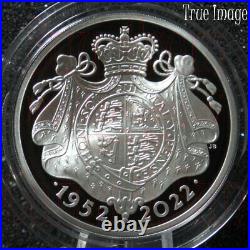 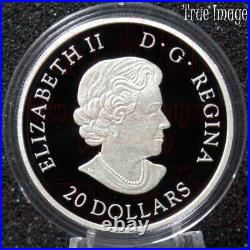 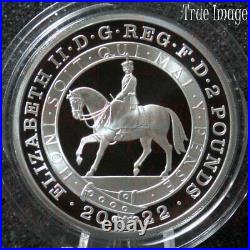 2022 – The Platinum Jubilee of Her Majesty Queen Elizabeth II – Pure Silver Proof Two-Coin Set. 2021 A Royal Celebration – Pure Silver Proof Two-Coin Set here. Anniversary of Her Majesty The Queen’s accession to the throne, the Royal Canadian Mint and The Royal Mint are proud to present this special two-coin set marking Her Majesty’s Platinum Jubilee. Each of these 1 oz. Fine silver coins features a unique design that captures the spirit of this historic occasion, the likes of which has never been seen before. Impeccably crafted and packaged together in a beauty box bearing the logos of both mints, these coins serve as a stirring tribute to The Queen as both the longest-reigning British monarch and Canada’s longest-serving Head of State. Capture the moment with this set of two fine silver Platinum Jubilee keepsakes. Celebrate Her Majesty’s Platinum Jubilee with this two-coin set from The Royal Mint and the Royal Canadian Mint. In 2022, Her Majesty becomes the first British monarch and the first sovereign in Canada’s modern era to celebrate an extraordinary milestone: the 70. Anniversary of her accession to the throne. ONE COIN FROM EACH MINT! A unique collaboration between The Royal Mint and the Royal Canadian Mint, this Platinum Jubilee Celebration set adds two 1 oz. Proof silver coins to your collection: one from the Royal Canadian Mint and one from The Royal Mint. The coin from The Royal Mint features the commemorative jubilee portrait of The Queen created by renowned sculptor John Bergdahl. The artist also designed the coin’s reverse, which was inspired by the coinage of William IV and makes use of the royal mantle surround. The coin from the Royal Canadian Mint features a reverse design by Pandora Young, who has captured Her Majesty as she looked in 1952, the year she became queen. The obverse features Susanna Blunt’s effigy of Her Majesty and shows the much-loved monarch we know today. Your two-coin set comes with a joint serialized certificate of authenticity and a card featuring a message from both mints. Only 5,500 sets are available worldwide. Your two coins are individually encapsulated and presented in a custom black clamshell, with a black beauty box bearing the logos of the Royal Canadian Mint and The Royal Mint. 99.99% pure silver. Pandora Young (reverse), Susanna Blunt (obverse). John Bergdahl (reverse and obverse). “Small Packets – International – Ground”???? I do leave feedback for everyone. This item is in the category “Coins & Paper Money\Coins: Canada\Commemorative”. The seller is “coins.4.fun” and is located in this country: CA. This item can be shipped worldwide.