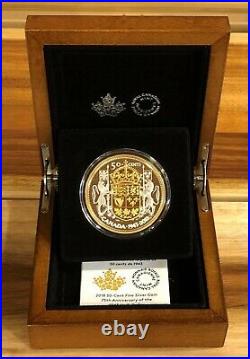 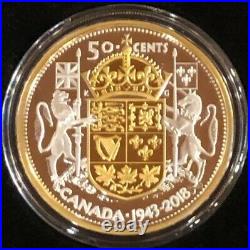 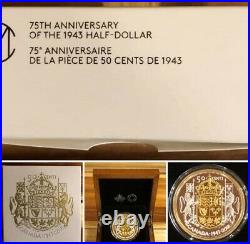 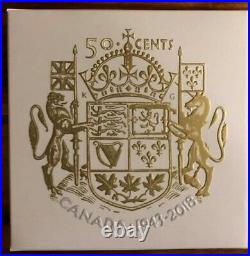 Canada’s 50-cent remains a constant, if elusive, collector favourite-one whose heraldic design imbues it with a deep sense of tradition and speaks to the history of a proud nation. This exclusive coin looks back at the half-dollar issued in 1943, which is re-created here in pure silver with a celebratory touch of gold plating. A MASTERS CLUB EXCLUSIVE! A collectible retrospective on the story of Canada’s half-dollar! This 75th anniversary piece re-creates the 1943 issue of Canada’s 50-cent coin-and it is only available to our Masters Club members! 2 OUNCES OF FINE SILVER! Nearly double the diameter of the original issue, this commemorative half-dollar is meticulously crafted in an impressive 2 ounces of 99.99% pure silver! Selective gold plating adds a touch of elegance to the Arms of Canada on the reverse, the effigy on the obverse, and the rim that frames the mirror-like proof finish! HISTORY ON TWO SIDES! The obverse features the effigy of King George VI by T. Paget-just like the 1943 half-dollar, including the “IND: IMP” inscription in the legend. Your coin is ready to display in its limited-edition wooden case and comes beautifully packaged in an attractive graphic beauty box. The Royal Canadian Mint certifies all of its collector coins. Most of these are serialized certifications, meaning that each certificate is given a unique number, starting at 1. Your coin features a re-creation of the stylized Arms of Canada designed by G. Kruger-Gray, as it appeared on Canada’s 50-cent coin in 1943. At the centre is the Shield, with the royal symbols of Great Britain and France in the upper quadrants: three lions (England), one lion within a “double tressure” (Scotland), the harp of Tara (Ireland), and three fleur-de-lis (France). In the bottom portion of the Shield, a sprig of three maple leaves represents Canadians of all origins. Two Supporters hold the Shield: on the viewer’s left, a lion holds a lance with the Union Jack; on the right, a unicorn holds the royal flag of France. Above the Shield is an enlarged version of the Royal Crown, which reflects the monarchy of Canada. Both the rim and the arms are gold-plated, which strikes an elegant contrast between the gleam of gold and the silver shine of the mirror-like background. The selective gold plating continues on the obverse, which features the effigy of George VI by Sir T. Beautifully presented in a Royal Canadian Mint branded wooden box, lined with black flocking and including a removable insert and special certificate compartment. Composition 99.99% pure silver. Weight (g) 62.69. Face value 50 cents. This item is in the category “Coins & Paper Money\Coins: Canada\Commemorative”. The seller is “funcanadiancoincc” and is located in this country: CA.