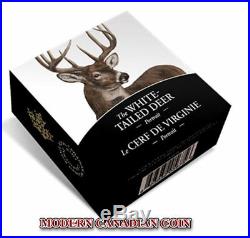 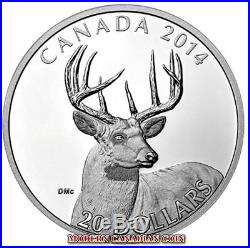 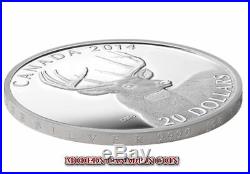 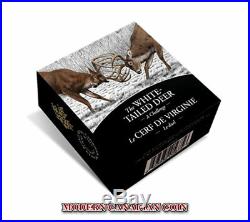 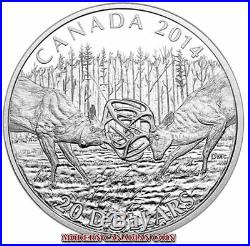 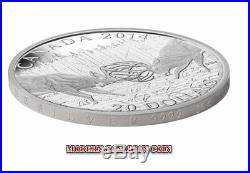 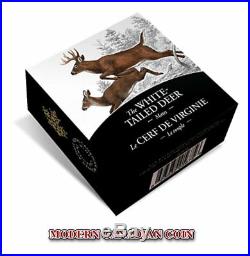 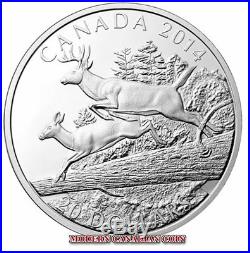 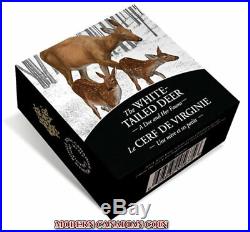 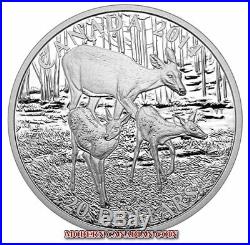 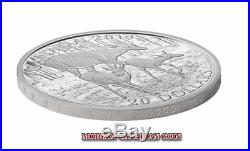 THE FIRST COIN: PORTRAIT! Although the white-tailed deer is common across much of southern Canada, seeing one is still a special treat for nature lovers. A symbol of the elusive yet constant presence of nature in this land, the white-tailed deer is now available for viewing year roundthanks to this exquisite new series of coins from the Royal Canadian Mint. This 1-ounce 99.99% pure silver coin features expert engraving and the use of multiple finishes to bring out the stunning details in this striking portrait of a male white-tailed deer with a large rack of antlers. First in the new White-Tailed Deer series featuring 4 silver coins. This 1-ounce coin features edge lettering indicating its metal weight. A low mintage of only 7,500 coins means that this edition is sure to be sought after by collectors. The Royal Canadian Mint has rarely featured the white-tailed deer on its numismatic coins. A beautiful addition to any collection featuring fine artwork, natural images, native species of Canada, symbols of awe and nature, or Canadiana. The reverse design by Canadian artist Desmond McCaffrey features a three-quarter profile portrait of a male white-tailed deer. Designed to showcase the singular beauty of a mature male white-tailed deer at the height of its strength, this image renders in fine detail the 10-point antler rack, large ears, distinctive eyes and muzzle, and strong neck and back of its subject. The antlers, which will be shed soon after they have reached their peak growth for the year, bear tines that point sharply upward and bend slightly forward. The lighter colouration of its inner ear, eyes, nose, and lower jaw, along with the rippling muscles of its powerful neck and back, are portrayed in dimensional detail by Royal Canadian Mint engravers. Your coin is encapsulated and presented in a Royal Canadian Mint-branded maroon clamshell with a custom beauty box. Specifications: PORTRAIT-THE FIRST COIN OF THE SERIE OF 4 COINS. 99.99% pure silver. Plain with edge lettering. Desmond McCaffrey (reverse), Susanna Blunt (obverse). Second coin in the series! The reverse design by Canadian artist Desmond McCaffrey features an image of two mature male white-tailed deer squaring off during the autumn rut. Designed to showcase the grace and power of two fighting bucks at the height of their strength, this image renders in fine detail two males locking their large multi-tined antler racks. With pleasing visual symmetry, the males face each other from the left and right sides of the image. They have just run at each other and now balance on their front legs in a powerful push for dominance. Their blunt-nosed muzzles are turned toward the viewer. Their variations of shading and rippling neck and back muscles are rendered in dimensional detail. The bucks fight in a large open field of sparse, dying grasses in late fall. Behind them is the dense and leafless autumnal boreal forest. Specifications: SECOND COIN: A CHALLENGE. Third silver coin in the series! The reverse design by Canadian artist Claudio D’Angelo features a white-tailed buck and doe leaping over a fallen pine tree. Capturing a powerful and energetic moment, this scene centres around the two leaping deer. In the foreground, the buck illustrates the “kick-off” stage of a deer’s leaping motion, with forelegs bent under its torso and back legs fully extended. His large, powerful neck holds his antlered head aloft and his namesake tail extends up and behind, its bright underside alerting other deer to danger. Just behind him and slightly to the left side of the image, a doe illustrates the landing phase of the leap, as her front legs stretch out ahead of her and her head, neck, and body point downward, while her rear legs, just visible behind her partner, bend toward her belly. The sense of motion is subtly enhanced by the composition, in which doe, buck, and fallen tree share a common trajectory. In the background, a tall conifer forest rises toward the sky. The scene is viewed from ground level, lending height and drama to the image. Specifications: THE THIRD COIN: THE MATES. Claudio DAngelo (reverse), Susanna Blunt (obverse). Fourth and last coin in the series! A DOE AND HER FAWNS! The reverse design by Canadian artist Trevor Tennant features a white-tailed doe and her two young fawns in their summer habitat. In this evocative scene, the doe walks behind her two knock-kneed and spotted offspring through a grassy clearing backed by young boreal forest: the deer’s preferred warm-weather habitat. In the lower left centre of the image, one young fawn glances to the left, its long ears extended back behind its head as it listens to its mother behind it. Viewed from the front with its ungainly little body in a graceful curve, the fawn’s youthful spots are clearly displayed, along with its long slender legs. Its sibling walks beside it, on the right side of the image, looking toward the right. Its front left leg is raised as it takes an uncertain step forward. Like its sibling, it keeps at least one ear trained on its mother at all times. Behind the fawns, the large doe walks with her head bowed toward her offspring, her slim but muscular body presented in dimensional detail by Royal Canadian Mint engravers. Each blade of grass below them, each narrow tree trunk in the background, the gentle slope of a distant hillside in the forest: all are engraved with the finest care to bring out the full beauty of the scene. Specifications: THE FOURTH COIN AND LAST COIN IN THIS SERIE! Trevor Tennant (reverse), Susanna Blunt (obverse). The item “CANADA $20 FINE SILVER COINS -SERIES OF 4 COINS THE WHITE-TAILED DEER 2014″ is in sale since Monday, September 4, 2017. This item is in the category “Coins & Paper Money\Coins\ Canada\Proof/Prooflike Sets”. The seller is “optoscval” and is located in Brossard. This item can be shipped worldwide.