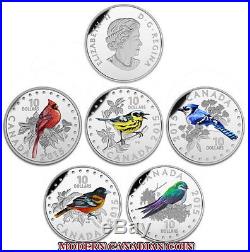 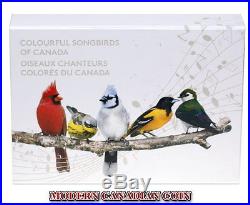 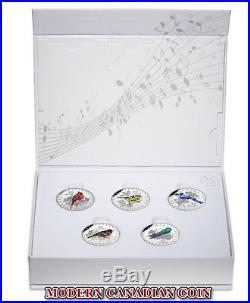 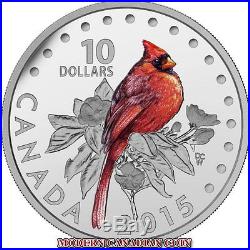 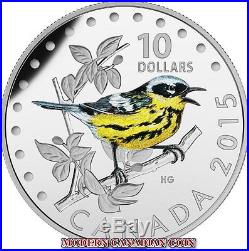 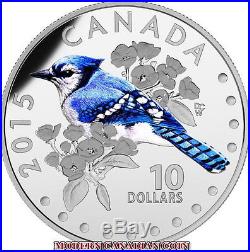 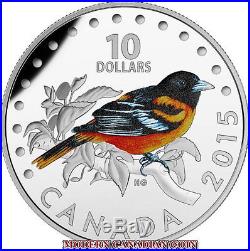 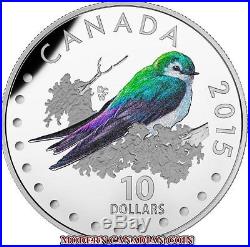 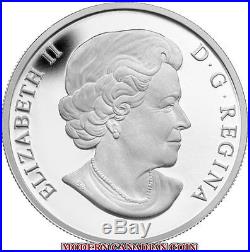 99.99% pure silver. Wicks (reverse), Susanna Blunt (obverse). An ideal gift for someone who enjoys birds! With its brilliant red plumage and a distinctive crest atop its head, the Northern Cardinal. Easily draws attention to itself wherever it is found. From southern Manitoba east to the Atlantic provinces, the beloved cardinal is one of many colourful songbird species that are testament to the inspiring beauty of nature in Canada. Order your single coin or order the five-coin subscription today! A new 5-coin series entitled Colourful Songbirds of Canada, which captures the beauty of some of Canada’s most distinctive bird species. Box to store your five coins: When you open the box, it plays the sounds the five birds make with a classical melody in the background! Celebrate the Northern Cardinal, whose song and bright colour have made it a favourite among bird watchers and nature lovers. The image was designed by award-winning artist Derek C. Wicks, who was twice named the National Artist of the Year by Ducks Unlimited Canada. This 99.99% pure silver coin shows application of selective colour to the engraved northern cardinal and recreates the vibrancy of the bird’s colouring in the wild. The first coin is Nothern Cardinal say Cardinal Rouge. The reverse design by Canadian artist Derek C. Wicks features a beautiful rendition of a northern cardinal in a tranquil setting. Finely detailed engraving showcases this songbird’s distinctive featuresfrom the pointed crest atop its head to its thick, short bill, as well as the soft feathers that lead to its tail. The use of selective colouring recreates the northern cardinal’s brilliant red plumage viewed in three-quarter profile, as the bird sits nestled amidst engraved leaves and flower blossoms. Usually male songbirds are the ones who singnot so for the northern cardinal! Both the female and the male northern cardinal sing, using a variety of melodies to communicate. The northern cardinal’s different calls have been described as a metallic chip when the birds are excited, and a series of down-slurred whistles. The northern cardinal’s call makes its presence knowneven if it’s well-hidden from view! Northern Cardinals can be surprisingly territorial, especially during the breeding season. It’s not unusual to see a northern cardinal attack its own reflection if it feels compelled to defend its territory against this intruder. The five song birds on coin with Selective colourful. The item “CANADA 2015 $10 1/2 oz. 5 FINE SILVER COINS COLOURFUL SONGBIRDS OF CANADA” is in sale since Sunday, March 19, 2017. This item is in the category “Coins & Paper Money\Coins\ Canada\Mint Sets”. The seller is “optoscval” and is located in Brossard. This item can be shipped worldwide.