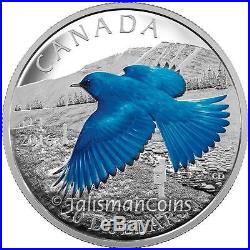 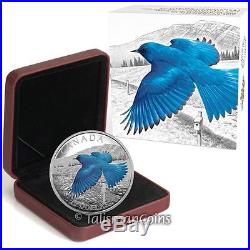 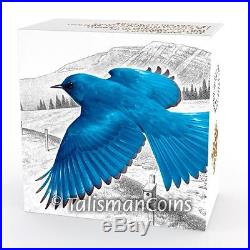 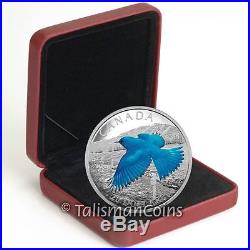 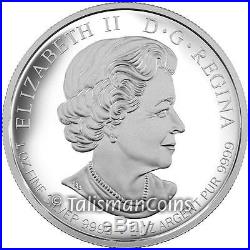 FIRST IN A NEW SERIES. First up, a vibrant, soaring Mountain Bluebird makes its way over field and stream to its nesting site. On this one troy ounce, pure silver wildlife proof with color! Wildlife conservation may seem like a modern concept, but a century ago, the United States and Canada were already working together to preserve and protect their shared migratory bird populations. The Migratory Birds Convention. Signed in 1916 by these two neighbors, stands as a groundbreaking milestone in the history of wildlife conservation. It’s enforced by Canada’s Migratory Birds Convention Act (MBCA, 1917) and America’s Migratory Birds Treaty Act (MBTA, 1918), both of which protect species, nesting sites and eggs from unregulated hunting and commercial activities Today, the Migratory Birds Convention remains a keystone of wildlife management in North America which celebrates its centennial in 2016. To mark the treaty’s 100th year, the Migratory Birds Convention Series. Of stunningly colorful songbirds brings us four of the keystone species that have benefited from its mission with exquisite designs that feature each bird in its natural habitat. The four Migratory Birds. In this program will include: Mountain Bluebird. American Avocet American Goldfinch Pileated Woodpecker. A Vividly Colored Original Work of Art! The design by Canadian wildlife. Artist Claudio DAngelo features a stunning in-flight portrait of a mountain bluebird soaring over an open meadow, where a nest box sits on a fencepost alongside a rocky stream. Finely detailed engraving gives this portrait a realistic, life-like quality by recreating the colorful songbirds fine features, from its pointed black bill to the feathers of its tail and outstretched wings. Vibrant hues recreate the mountain bluebirds most defining feature, its dazzling sky-blue plumage, and add a brilliant, gem-like splash of color against the engraved rolling foothills of the Rocky Mountains in the background. Technology Note – Color. The Royal Canadian Mint leads the world with its proprietary colorization technology, in which the color is actually sealed on the coin. The intricate detail, smooth gradients, and extreme precision of the technology create a stunning look on each coin. Technology Note – Purity. The Royal Canadian Mint refines the purest silver in the world. The RCM is also the only mint in the world to issue commemorative coins in a. This one troy ounce silver coin is 99.99% pure! The date and denomination are also indicated. Her Majesty, Queen Elizabeth II. In profile facing right. This portrait, the fourth effigy of the queen to appear on Canadian coinage, was executed by the artist Susanna Blunt. The legend ELIZABETH II D. REGINA (“Elizabeth II, Queen by the Grace of God”) also appears. The legend SILVER 9999 1 OZ ARGENT PURE 9999 guarantees the weight and purity. The coin is encapsulated inside a burgundy leatherette, clamshell-style presentation case, lined with black velvet and protected by a full color outer box. An individually-numbered certificate of authenticity is included. 9999 Fine (Pure) Silver. The item “Canada 2016 Migratory Birds Convention Mountain Bluebird $20 Silver Proof Coin” is in sale since Wednesday, February 3, 2016. This item is in the category “Coins & Paper Money\Coins\ Canada\Commemorative”. The seller is “talismancoins” and is located in Saint Louis, Missouri. This item can be shipped worldwide.