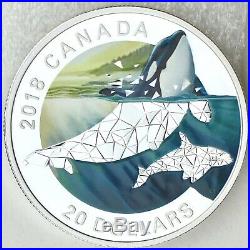 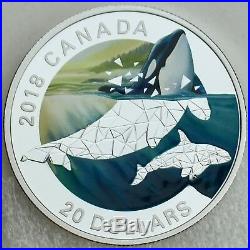 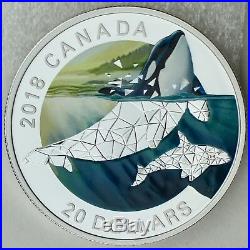 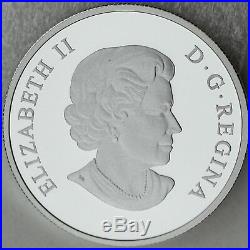 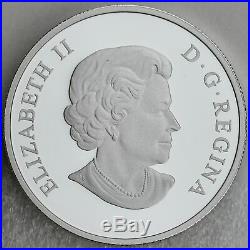 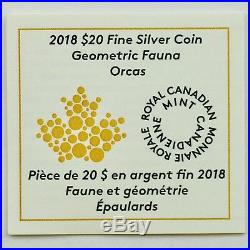 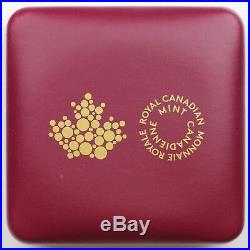 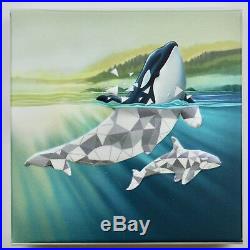 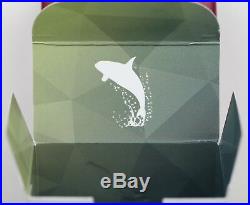 Pure Silver Colored Proof Coin. Composition : 99.99% pure silver. Weight (g): 31.83 (one troy ounce). Certificate: serial numbered (serial numbers will vary). Face value: 20-dollars (a legal tender Canadian coin). Artists: Claude Thivierge (reverse), Susanna Blunt (obverse). The black-and-white orca (Orcinus orca) is a sight to behold in coastal waters, where a sleek dorsal fin breaching the oceans surface is the first sign of its presence. Steeped in the myths and legends of the Pacific Coast, the largest member of the dolphin family (Delphinidae) is a powerful marine predator one known for complex social behaviors and astounding aerial displays that suggest a gregarious nature. LOWER MINTAGE THAN PREVIOUS POLYGON ART COLLECTION! FINAL COIN IN 3-COIN SERIES! The orcas coin continues a superb series of wildlife portraits that takes a more contemporary approach to design, by merging a realistic depiction with one based on pure geometry! Previous coins in the series include. Each of these beloved icons of the Canadian wilderness is comprised of carefully positioned polygon shapes that are characteristic of low poly art, before merging with a more true-to-life depiction. The effect of golden sunlight splashing across the coastal landscape is brought to life by an outstanding application of bold colors over precision-engraved relief a combination that effectively transforms a flat image into a multi-layered work of art! A VARIETY OF FINISHES! Precisely engraved to ensure crisp lines, each polygon shape is set apart by different finishing techniques that mimic light and shadows, which adds yet another realistic touch to the stylized image. The Royal Canadian Mint certifies all of its collector coins. Most of these are serialized certifications, meaning that each certificate is given a unique number, starting at 1. Only 6,000 coins will be made available worldwide. 99.99% PURE SILVER COIN! For our Canadian customers, this coin is GST/HST exempt! Designed by Claude Thivierge, this coin combines two different art styles to capture the majestic beauty and strength of a cultural icon. On Canadas Pacific Coast, the fjord-like coastline basks in the golden glow of sunlight, which spills into the ocean and illuminates the upper depths. The scene is split between the above water world and the orcas underwater realm, where two pod members are rendered in a low poly art style. In spite of their geometric nature, the precision-engraved polygons are each carefully positioned to re-create the orcas rounded silhouette as it easily moves through the water. A burst of movement comes from the foremost orca, which suddenly rises up above the oceans surface. This action simultaneously shatters the watery divide and the geometric barrier, as the breaching orcas appearance smoothly transitions from abstract to realism above the water. The word CANADA, the face value 20 DOLLARS, and the year 2018 are engraved along the rim that frames much of the reverse image. The obverse features the effigy of Her Majesty Queen Elizabeth II by Susanna Blunt. While it is prominent in the legends and myths of the Northwest Coast, the orca is found in all three oceans that line Canadas coasts: the eastern Arctic, the North Atlantic and the Pacific. It is popular known as a killer whale, the name given by ancient fishermen, who were impressed by its tremendous size and hunting abilities. Orcas are highly social they prefer to travel and hunt in tight-knit pods that have their own distinct dialect. Cooperative behaviors are also passed down from one generation to the next, with the entire pod caring for each calf. Each coin is encapsulated and presented in a Royal Canadian Mint-branded maroon clamshell protected by a graphic beauty box. Photos: When a listing offers multiples of the same coin, one coin is picked at random and photographed. Since all coins offered in that listing are essentially identical, the coin photographed is representative of all coins offered. These photos were taken through the plastic cling film that protects the coins; any dust, etc. On the outside surface of the capsules doesnt affect the coins. Surface areas that appear black on some proof coin photos are actually highly polished, mirror-bright metal reflecting the color of the camera. We place the coin at an angle, in some photos, to better depict the mirror bright finishes. However, angling the coin usually results in one side of the coin being slightly out of focus. Whenever possible, we use actual photos of our coins, rather than just artists conception drawings from the Mint. We frequently update and upgrade the photos that appear with our listings, using improved cameras and lenses and better lighting. We will honor your requests for additional photos as quickly as our schedule permits. The item “Canada 2018 $20 Geometric Fauna Orcas, 1 oz. Pure Silver Colored Proof Coin” is in sale since Wednesday, June 6, 2018. This item is in the category “Coins & Paper Money\Coins\ Canada\Commemorative”. The seller is “okranchlandandcattlecompany” and is located in Lewisville, Texas. This item can be shipped to United States, Canada, United Kingdom, Denmark, Romania, Slovakia, Bulgaria, Czech republic, Finland, Hungary, Latvia, Lithuania, Malta, Estonia, Australia, Greece, Portugal, Cyprus, Slovenia, Japan, China, Sweden, South Korea, Indonesia, Taiwan, Thailand, Belgium, France, Hong Kong, Ireland, Netherlands, Poland, Spain, Italy, Germany, Austria, Bahamas, Israel, Mexico, New Zealand, Philippines, Singapore, Switzerland, Norway, Saudi arabia, United arab emirates, Qatar, Kuwait, Bahrain, Croatia, Malaysia, Brazil, Chile, Aruba, Brunei darussalam, Ecuador, Egypt, Guadeloupe, Iceland, Jordan, Macao, Viet nam, Uruguay, Belize, Dominica, Grenada, Saint kitts and nevis, Turks and caicos islands, Bangladesh, Bolivia, French guiana, Guernsey, Gibraltar, Jersey, Cambodia, Liechtenstein, Luxembourg, Monaco, Martinique, Nicaragua, Peru, Pakistan, Paraguay, Russian federation, South africa, Colombia, Antigua and barbuda, Saint lucia, Barbados, Bermuda, Cayman islands, Sri lanka, Maldives, Oman, Reunion, Montserrat.