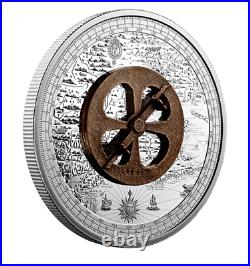 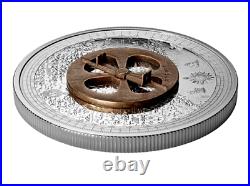 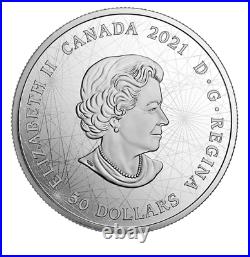 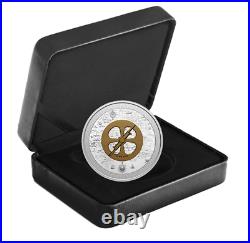 Pre-sale Ships the end of April! The tale of the 17th century mariner’s astrolabe found near Cobden, Ontario, is the inspiration for this 5 oz. Its reverse features a small-scale reproduction of the lost-then-found astrolabe, cast in silver and bronze plated fixed atop Samuel de Champlain’s map of New France (1632). The astrolabe’s graduated scale encircles the map, which has been re-created using a mix of traditional and laser engraving that gets all the details right. The end result is a design that perfectly channels the spirit of the era in which the astrolabe was made, used and lost! Discover the fascinating tale of the 17th century mariner’s astrolabe found near Cobden, Ontario, and popularly associated with French explorer-cartographer Samuel de Champlain. Cast in silver and bronze-plated, a reproduction of a mariner’s astrolabe tops the reverse of your 5 oz. 99.99% pure silver coin. TREASURES IN ONE DESIGN! An engraved rendering of Samuel de Champlain’s hand-drawn map of New France backs our mariner’s astrolabe it’s a nod to the story of the astrolabe, but also to the era it represents. A MIX OF TECHNIQUES! The astrolabe’s graduated scale is engraved near the rim in greatdetail. The map’s elements were reproduced using a mix of traditional and laser engraving techniques to ensure all the finer details stand out. THE ART OF CARTOGRAPHY! The vintage map perfectly channels the spirit of early European exploration in Canada. It’s a striking effect, and it makes this a must-have piece for history and cartography enthusiasts. A similar coin, the 2019. Rose of the Winds. This coin has a limited mintage of 1,000 worldwide. The Royal Canadian Mint certifies all of its collector coins. The reverse design features a reproduction of the 17th century mariner’s astrolabe found near Cobden, Ontario, and popularly associated with French explorer-cartographer Samuel de Champlain. Used to determine latitude, the navigational tool-turned-treasure is cast in silver and bronze plated on this coin; it is backed by an engraved reproduction of Champlain’s hand-drawn map of New France (1632), which is framed by the astrolabe’s graduated scale. The obverse features the effigy of Her Majesty Queen Elizabeth II by Susanna Blunt. Champlain’s “lost” astrolabe. This idea sprang forth in the 19th century after the astrolabe’s discovery, but Champlain’s detailed account of his 1613 expedition up the Ottawa River contains no mention of a lost navigational instrument. Nevertheless, the mariner’s astrolabe bears the date “1603” and lay on a rare portage route used by Champlain; the French explorer would have used an astrolabe in his many voyages at sea and while charting the coasts and waterways of eastern Canada. Another theory holds that the astrolabe could have belonged to missionaries or other travellers who used the same route as Champlain. The astrolabe was found in August 1867. A 14-year-old boy was helping his father clear trees on the shores of Green Lake (now Astrolabe Lake) near Cobden, Ontario, when he unearthed a brass disk. In June 1989, the Canadian government acquired it and conferred it to the Canadian Museum of Civilization (now the Canadian Museum of History), where it proudly resides. The astrolabe is missing a piece. The Cobden astrolabe is the smallest of the surviving 17th century mariner´s astrolabes and is in excellent condition, except for one missing piece: a small ring to which a weight would be attached in order to steady the instrument. The ring was still intact in an 1879 photograph, so it likely broke off in the late 19th century. Mariner’s astrolabe is a simplified astrolabe. Made of brass or bronze, it was designed for use at sea; its four windows allowed the breezes to pass through while a weight at the bottom kept it steady. It was a common navigational instrument in the 16th and 17th centuries, but only a hundred or so exist today including the famous one highlighted on this coin. Of the 100 astrolabes that have survived to this day, at least five are known to be in Canada. They include: a Spanish astrolabe ca. And held by Parks Canada; the Cobden astrolabe (1603) presumably made in Honfleur, France, and represented on this coin; two astrolabes a French one (1617) and a Portuguese one (1638) discovered at Isle-aux-Morts, N. And held at The Rooms in St. And a Portuguese one (1632) preserved at the Sulpician Vieux Séminaire in Old Montreal. Another astrolabe (1593) discovered in Cuba by a team of Canadian underwater treasure hunters likely resides in a private collection in Canada. Your coin is individually encapsulated and presented in a Royal Canadian Mint-branded clamshell with a black beauty box. Please Pay Within 3 Days of Closing. International Buyers Please Note. We do not mark merchandise values below value or mark items as “gifts” – US and International government regulations prohibit such behavior. The item “Canada 2021 5 oz Pure Silver Coin Lost Then Found Champlain and the Astrolabe” is in sale since Tuesday, March 30, 2021. This item is in the category “Coins & Paper Money\Coins\ Canada\Commemorative”. The seller is “leafster_2006″ and is located in York, Ontario. This item can be shipped to United States, Canada.