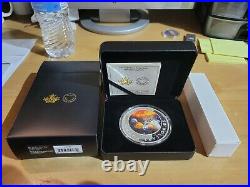 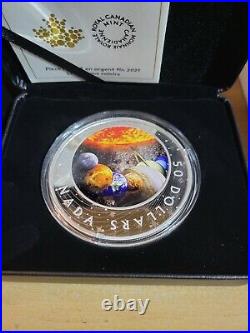 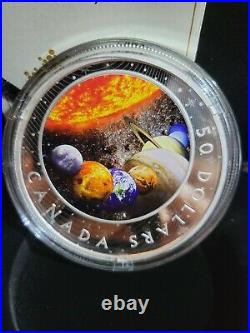 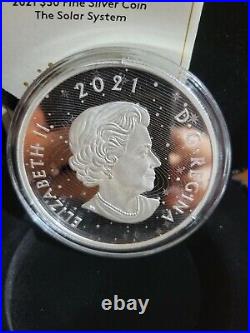 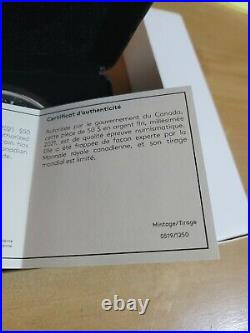 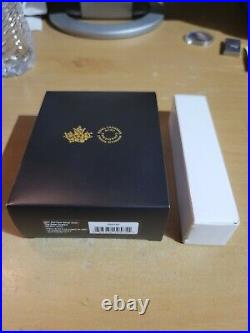 Pure silver coin is a window to our solar system, presented with artistic flair. Dotted with stars, the engraved “orbital” pattern swirls around the colourful view of space on your coin’s reverse. All eight planets, as viewed by telescopes in space, are artfully grouped together in order to highlight the differences in size and appearance. As for the Sun and the stars, they are celestial sources of light in space. On this coin: shine a black light flashlight on the reverse and watch as these enhanced elements begin to glow! A treat for astronomers and skygazers. Order your coin today! CELEBRATE SCIENCE AND TECHNOLOGY! The solar system comes to life on this 5 oz. 99.99% pure silver coin, which celebrates science and space exploration. COMES WITH A BLACK LIGHT FLASHLIGHT! Use the black light flashlight (included) to activate the enhanced design features and watch the Sun and stars emit a celestial glow! The swirling “orbit” pattern engraved on your coin extends the space theme to the obverse and pulls you deeper into the colour element on the reverse. The view is just as colourful as the images captured by powerful telescopes in space, which add to our understanding of our Milky Way galaxy. Mintage is limited to just 1,250 coins worldwide. FOR THE LOVE OF SCIENCE AND ART! Your coin’s artistic representation of our solar system makes it the perfect collectible for astronomers and skygazers. It’s a conversation starter for all ages – especially with its black light-activated features! The Royal Canadian Mint certifies all of its collector coins. Designed by artist Neil Hamelin, your coin’s reverse features an awe-inspiring portrait of the solar system. It features a partial view of the Sun opposite the eight planets, which are artfully arranged in order of distance from the sun (nearest to farthest): Mercury, Venus, Earth, Mars, Jupiter, Saturn, Uranus and Neptune. Black light technology adds a cool white light to the stars and intensifies the Sun’s gaseous glow. Dotted with stars from the disk of our Milky Way galaxy, the engraved “orbital” pattern swirls around the colour element on the reverse; it also appears on the obverse, which features the effigy of Her Majesty Queen Elizabeth II by Susanna Blunt. The Sun is enormous, at least by our standards! It accounts for 99.8% of the solar system’s total mass, and we’re all bound by its gravitational force – the eight planets, five known dwarf planets (including Pluto), 200+ moons, and millions of asteroids, comets and meteoroids. Surprisingly, our Sun is just an average-sized star when you look beyond our solar system – Betelgeuse, a red giant in the Orion constellation, is 700 times larger and 7,000 to 14,000 times brighter than the Sun! A planet’s colours are determined by its composition, and by the way light interacts with its atmosphere or surface. Mercury’s rocky, dust-covered surface is to blame for its stark grey colour. Venus looks yellow-orange due to its carbon dioxide atmosphere and sulphuric acid clouds. Earth gets its colours from the oceans, clouds and land. Iron oxide in the soil is the reason Mars is known as the red planet. Jupiter’s stormy atmosphere is responsible for its gaseous swirls, colourful bands and famous red spot. The spot is the largest storm in our solar system – it’s bigger than Earth and has been raging for at least three centuries! Easily recognized by its seven rings, Saturn’s upper atmosphere contains chemical compounds that tint its fast-moving cloud bands. Ice giants Uranus and Neptune appear blue due to the presence of methane gas in the atmosphere. These two are also ringed planets, like Saturn, but their rings are more faint. Your coin is encapsulated and presented in a Royal Canadian Mint-branded clamshell with a black beauty box. 99.99% pure silver. Neil Hamelin (reverse), Susanna Blunt (obverse). This item is in the category “Coins & Paper Money\Coins: Canada\Commemorative”. The seller is “gizzardsstuff” and is located in this country: US. This item can be shipped worldwide.