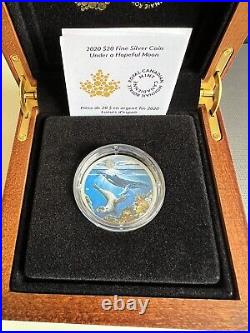 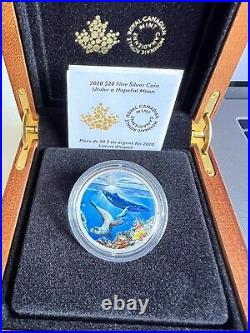 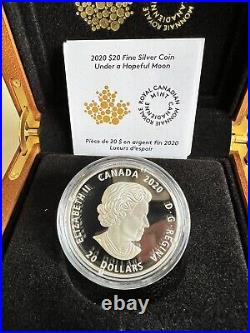 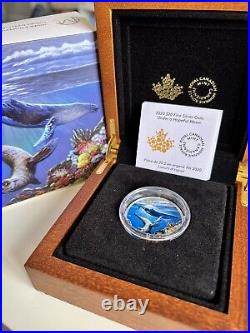 Use black light technology to reveal a hidden nighttime scene. The ocean’s beauty shines thanks to black lighttechnology, which reveals a hidden nighttime scene off Canada’s coast. A scapolite stone (a first) hangs in the sky like the full moon. And in the water, two recovering at-risk species-a Steller sea lion and a humpback whale-remind us that there is hope for our waters when we all work together. A Masters Club exclusive! A scapolite stone (a first) hangs in the sky like the full moon on your coin. A MASTERS CLUB EXCLUSIVE. Masters Club members, this coin was specially made for you! Your coin comes packaged in anexclusive Masters Club beauty box with a special Masters Club certificate. INCLUDES A BLACK LIGHT FLASHLIGHT. The artistry of your coin can be appreciated in any light, but viewing it under a black light (included) activates the special technology! ADORNED WITH A GEM. The colourful art is topped by a sparkling scapolite stone-a Mint first that adds a rare fluorescence to the design. We’ve combined colour and light technologies tolight up this ocean scene and capture the beauty of life on our coasts. The coindesign seamlessly transitions to a nighttime scene with the help of black light technology, which addsa moonlight effect. ART WITH A MESSAGE. The design is a conservation-themed message about the need toprotect our marine plant and wildlife species. Features anabove and under-water view that is seldom seen on our deep sea-themed coins. SPECIAL CERTIFICATE : Yourcoin includes a special Masters Club certificate. LOW MINTAGE : Limited to 2,500 coins worldwide. 99.99% PURE SILVER. Your coin is crafted from one ounce of 99.99% pure silver. Design: The reverse image by artist Pierre Girard is a split under- and above-water view of one of Canada’s colourful deep-water habitats. In the deep sea waters off the coast of British Columbia, a humpback whale. Swims near a Steller sea lion. Both mammals are at-risk species that appear to be on the road to recovery, while the marine environment stresses the importance of protecting marine species and their habitats. Above the water hangs a sparkling scapolite stone that gets a boost of fluorescence when viewed under UV light, while black light technology adds a moonlight effect. The artistic and realistic approach to this coin was a pretty exciting challenge for me. Painting these at-risk species in their habitat made me think about how fragile the ecosystem is. However, the light that shines in this design somehow brings a sense of hope and life. Canada has already surpassed its target of protecting 10% of its marine areas by 2020. The underwater equivalent to our national parks, Canada’s marine protected areas (MPAs) provide shelter for plant and wildlife species to help them recover from human impact e. Cold water corals and sponges can be found in the waters off Canada’s Atlantic, Pacific and Arcticcoasts. In the coastal waters of British Columbia, more than 80 species of cold-water corals make up the Pacific rocky marine environment, which is home to over a thousand different species of marine animals. But our marine habitats are under threat from acidification and human activity. The Steller sea lion is the largest of all sea lions. The large-sized carnivore can be found in the waters that line the coastal islands of British Columbia. It was listed as a protected species in 1970, when its numbers were in decline due to fishing and other human impact factors. Steller sea lion populations have since doubled, although habitat losscontinues to be a threat. The humpback whale is one of the ocean’s noisiest inhabitants. This marine giant was nearly hunted to the verge of extinction by the mid 20th-century. In 1985, the North Pacific population included just a few hundred individuals, and the species was classified as “threatened” on Canada’s list of at-risk species. The good news: Population numbers had increased by 2014 when its status was downgraded to “special concern, ” although thespecies continues to face threats such as entanglement, pollution and human activity. Scapolite comes in a variety of colours (yellow, violet, orange, pink, brown or grey) and is known for its fluorescent properties. This gemstone was first discovered in Myanmar; today, it has been found in a number of locations, including Canada-specifically, southern Ontario and Quebec. Packaging: Your coin comes packaged in an exclusive Masters Club beauty box with a special Masters Club certificate. This item is in the category “Coins & Paper Money\Coins: Canada\Commemorative”. The seller is “the_artful_pickle” and is located in this country: CA. This item can be shipped to Canada, United States.