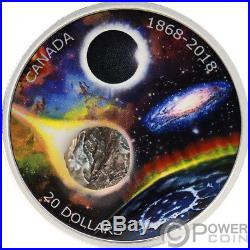 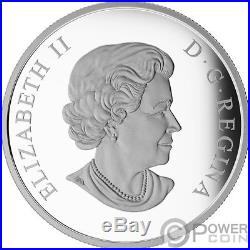 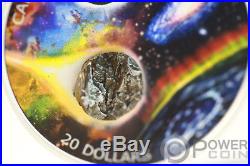 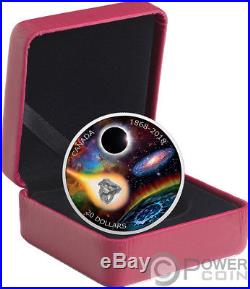 This beautiful 1 Oz Silver coin is dedicated to the 150th Anniversary of The Royal Astronomical Society of Canada. The coin features an exceptional unique space scene with a real meteorite fragment, has a wonderful design, has a Proof quality and comes in an elegant case, along with the Certificate of Authenticity. Limited mintage of 5.500 pieces worldwide. The reverse design by Alexandra Lefort is a re-interpretation of The Royal Astronomical Society of Canadas sesquicentennial logo in a scientifically accurate, photorealism art style. The original logo features stars that allude to Canadian contributions to stellar spectroscopy and photometry, and a globular cluster that honours the scientific work of Helen Sawyer Hogg and Canadas cooperative partnerships; both are colourfully re-imagined here as the Eagle Nebulaspecifically the pillars of interstellar gas and dust known as the Pillars of Creation, where the formation of new stars is a symbolic representation of the RASCs beginnings (and by extension, its anniversary). All around the reverse, the inscriptions: CANADA the issuing country, 1868 2018 the years of Anniversary and the year of issue, 20 DOLLARS the face value. The obverse of the coin depicts the effigy of Her Majesty Queen Elizabeth II and the inscriptions: ELIZABETH II the name of the Queen and D · G · REGINA Dei Gratia Regina. Campo del Cielo The Campo del Cielo refers to a group of iron meteorites or to the area where they were found. [1] This area is situated on the border between the provinces of Chaco and Santiago del Estero, 1,000 kilometers (620 mi) northwest of Buenos Aires, Argentina. The crater field covers an area of 3 by 18.5 kilometres (1.9 by 11.5 mi) and contains at least 26 craters, the largest being 115 by 91 metres (377 by 299 ft). The craters’ age is estimated as 4,0005,000 years. The craters, containing iron masses, were reported in 1576, but were already well known to the aboriginal inhabitants of the area. The craters and the area around contain numerous fragments of an iron meteorite. The total weight of the pieces so far recovered is about 100 tonnes, making the meteorite possibly the heaviest one ever recovered on Earth. The largest two fragments, the 37-ton El Chaco and 30.8-ton Gancedo, are among the heaviest single-piece meteorite masses recovered on Earth, along with the 60-ton Hoba and a 31-ton fragment of the Cape York meteorite. The item “ROYAL ASTRONOMICAL SOCIETY 150th Anniversary 1 Oz Silver Coin 20$ Canada 2018″ is in sale since Monday, June 25, 2018. This item is in the category “Coins & Paper Money\Coins\ Canada\Commemorative”. The seller is “powercoin_italy” and is located in Roma. This item can be shipped worldwide.