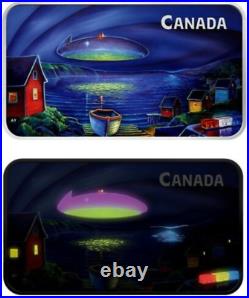 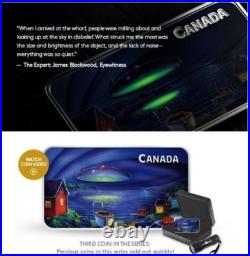 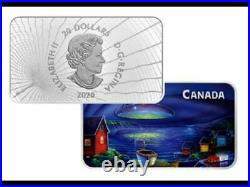 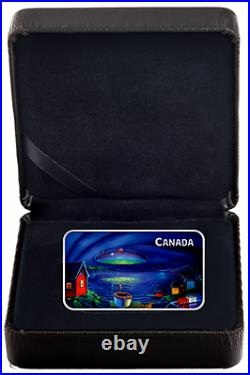 Canada’s Unexplained Phenomena. 3rd coin in the Series. Experience the thrill of a UFO sighting with this THIRD coin in the series! What happens when a UFO witness is an on-duty police officer? Enhanced with black light-activated technology, the THIRD. Coin is a colourful retelling of a famous Canadian UFO event. The 1978 Clarenville Incident is a compelling account that can’t be easily dismissed since it involved several witnesses, including an RCMP officer who described a strange sight that has never been satisfactorily explained. October 26, 1978, 1:45 a. Responding to a call, RCMP Constable James Blackwood arrived at the scene in Clarenville, N. Where witnesses directed his attention to a brightly lit object in the sky. Using binoculars and a high-powered scope, they observed the fin-tailed, oval-shaped craft as it hovered above the water near Random Island. It emitted no sound; and when the officer flashed the lightbar on his police cruiser, the mysterious craft instantly mimicked the lights. It remained in the area for nearly an hour before rising up suddenly and vanishing into the night, leaving no trace of its passage except a credible eyewitness account. Don’t be disappointed, order yours. BACK BY POPULAR DEMAND. Fine silver rectangular coin gives you a front row seat to a famous Canadian UFO event: the 1978 incident at Clarenville, N. THIRD COIN IN THE SERIES. From unusual sightings to strange encounters, this series brings you some of Canada’s most fascinating tales of unexplained phenomena. For the third UFO tale, the coin features a landscape orientation that allows for a sweeping waterfront view, and an expressive art style that gives it a distinct Newfoundland vibe. Use the black light flashlight (included) to activate the coin’s glow-in-the-dark features, and you’ll see the bright lights described by the witnesses. LOW MINTAGE, HIGH DEMAND. Mintage is limited to just 5,000 coins worldwide and it will likely be a sought-after piece. So hurry, order yours today! The reverse design by Adam Young is an artistic representation of a 1978 UFO event that took place in Clarenville, N. Rendered in a colourful and expressive art style, the landscape-oriented image shows the event from the perspective of the witnesses, including the RCMP officer whose police cruiser appears in the bottom right corner. The oval-shaped craft is seen hovering over Random Sound on a clear night. Black light-activated technology adds a bright glow to the mysterious object and its illuminated reflection on the water. The obverse features the effigy of Her Majesty Queen Elizabeth II by Susanna Blunt. I wanted this piece to include all the elements of the 1978 experience while also incorporating the rugged yet whimsical coastline so often found in the Newfoundland landscape. Light and line direction were also important aspects of the design, creating a circular visual flow throughout the composition. This has been an exciting artistic endeavour, which, throughout my research for the design, has caused me to tumble down the rabbit hole of other Canadian UFO sightings. When I arrived at the wharf, people were milling about and looking up at the sky in disbelief. What struck me the most was the size and brightness of the object, and the lack of noise everything was so quiet. Expert: James Blackwood, Eyewitness: The Expert. A similar object was spotted in the area on October 12, two weeks prior to the UFO event depicted on this coin. Blackwood, an aircraft enthusiast, was sceptical when he first arrived at the scene. Using a telescope retrieved from the detachment office, Blackwood studied the Boeing 737-sized craft through the magnified view. It appeared to be made of a dull, coarse-looking metal and had no doors or windows. Its bottom half was bathed in white light, with flashing blue lights on both sides and a red one on top. The sighting was reported to the Department of National Defence. The National Research Council suggested it may have been the planet Jupiter casting its shadow on the water, but the witnesses disagreed with this explanation. Your coin is encapsulated and presented in a Royal Canadian Mint-branded clamshell with a black beauty box. Includes Black Light Flashlight. If you enjoy UFO stories, then this coin is for you! Experience the thrill of a UFO sighting with this THIRD coin in our series! GET A REPLACEMENT HERE. CANADA RCM Official UV 9-LED BLACKLIGHT FLASHLIGHT for Glow-in-the-Dark Coins. Composition: 99.99 pure silver. Weight: 31.56 grams. Diameter: 49.8mmx28.6mm. Items shown in pictures are similar to the actual items for sale. Stock Photo – You may get identical items than the actual items shown. Check out our Other Items. Please do not hesitate to ask questions about this or any of our other auctions! We answer all inquiries. Need more scans or pictures, just ask. We have many other Canadian Gold or Silver coins and cases/COA’s in stock. The item “UFO COIN 2020 CANADA The Clarenville Event Glow-In-The-Dark $20 1oz Pure Silver” is in sale since Thursday, October 1, 2020. This item is in the category “Coins & Paper Money\Coins\ Canada\Commemorative”. The seller is “jw-collectibles” and is located in North Vancouver, British Columbia. This item can be shipped to Canada, United States.