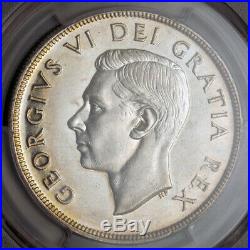 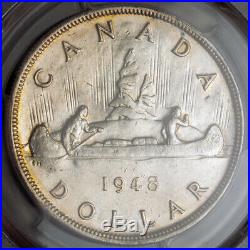 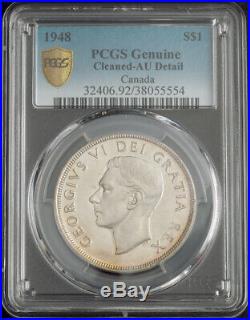 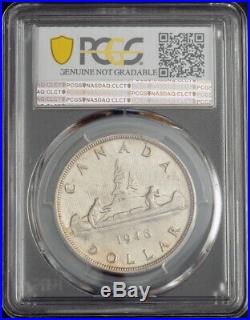 1948, Canada, George VI. Mint Year: 1948 Reference: KM-37. Mintage: 18,780 pcs. Denomination: Dollar Designer: Emanuel Hahn (EH) Condition. Certified and graded by PCGS as AU Details: Cleaned! 800 Weight: 23.33gm Diameter: 36mm. Obverse: Head of George VI left. Legend: GEORGIVS VI D: G: REX ET IND: IMP. Reverse : Fur trader (Voyageur) and a native man (indian) in a canoo, loaded with two bundles of furs. Date (1948) in field below. The Voyageur Dollar was a coin of Canada struck for circulation in silver from 1935 to 1966, and as a commemorative in 2003. A nickel version was struck from 1968 to 1987. In 1987, the coin was replaced by the loonie. The coin still remains a legal tender in Canada. George VI (Albert Frederick Arthur George; 14 December 1895 – 6 February 1952) was King of the United Kingdom and the British Dominions from 11 December 1936 until his death. He was the last Emperor of India (until 1947) and the last King of Ireland (until 1949). As the second son of King George V, he was not expected to inherit the throne and spent his early life in the shadow of his elder brother, Edward. He served in the Royal Navy during World War I, and after the war took on the usual round of public engagements. He married Lady Elizabeth Bowes-Lyon in 1923, and they had two daughters, Elizabeth (who succeeded him as Queen Elizabeth II) and Margaret. At the death of his father in 1936, the future George VI’s brother ascended the throne as Edward VIII. However, less than a year later Edward expressed his desire to marry the twice-divorced American socialite Wallis Simpson. For political and religious reasons, the British Prime Minister, Stanley Baldwin, advised Edward that he could not marry Mrs. Simpson and remain king. So, Edward abdicated in order to marry. By reason of this abdication, unique in the history of the British Isles (previous abdications were forced by military or political pressures), George VI ascended the throne as the third monarch of the House of Windsor. Within twenty-four hours of his accession the Irish parliament passed the. Which essentially removed the power of the monarch in Ireland. Further events greatly altered the position of the monarchy during his reign: three years after his accession, his realms, except Ireland, were at war with Nazi Germany. In the next two years, war with Italy and the Empire of Japan followed. A major consequence of World War II was the decline of the British Empire, with the United States and the Soviet Union rising as pre-eminent world powers. With the independence of India and Pakistan in 1947, and the foundation of the Republic of Ireland in 1949, King George’s reign saw the acceleration of the break-up of the British Empire and its transition into the Commonwealth of Nations. The item “1948, Canada, George VI. Silver Dollar Coin. Key-Date w. Low Mintage! PCGS AU+” is in sale since Tuesday, November 26, 2019. This item is in the category “Coins & Paper Money\Coins\ Canada\Dollars”. The seller is “coinworldtv” and is located in Wien. This item can be shipped worldwide.