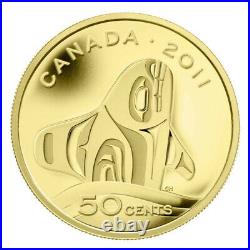 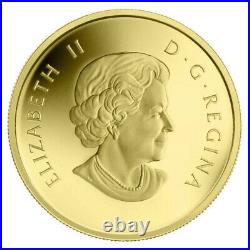 2011 Canadian 50-Cent Orca Whale 1/25 oz Pure Gold Coin. Your coin is encapsulated and packaged in the original Royal Canadian Mint packaging, including the COA. Canadas environment is central to the countrys cultural life; Canadians interaction with their environment has proved a potent source of creative inspiration for centuries. Arguably the most well-known representations of Orcas have been derived from their intimate place in the traditions and culture of west coast First Nations communities including the Haida, Tlingit, and Kwakwakawakw. Orcas, the largest members of the dolphin family, are among the cleverest mammals on earth; they hunt fish, seals, squid, turtles, birds, other whales, in pods of up to three dozen individuals. Orcas possess an ability shared with few other members of the animal kingdom: they can learn new things during their lifetimes and pass these teachings on to the next generation. Despite their power and intelligence, these creatures remain susceptible to encroachment on their habitat, pollution levels in the oceans, and even the consistent presence of sound, which disturb the Orcas ability to communicate. While the Orcas distinctive colour patterns, intelligence, sociability, playfulness, particularly its spectacular leaps, long ago established them as Canadian icons, their vulnerability to our actions should serve as a reminder of Canadians roles as the stewards of their surroundings. One in a series of four coins designed by Canadian Aboriginal artist Corrine Hunt- designer of the gold, silver, and bronze medals, produced by the Royal Canadian Mint, for the Vancouver 2010 Winter Olympic Games. Other coins available in this series include the Wood Bison, Peregrine Falcon and the Boreal Forest. The reverse design by Corrine Hunt depicts a stylized orca executed with Hunts unique interpretation of traditional Kwakwakawakw and Tlingit forms. The breeching orcas powerful head, body, and dorsal and pectoral fins have escaped the swell of the sea, hurtling the mythical sea-king from sea to air – its two domains. In the body, an ovoid form represents the many generations, past and present, of the community in which the Orca thrives. 2011 Canadian 50-Cent Orca Whale 1/25 oz Pure Gold Coin comes encapsulated and presented in a maroon clamshell case lined with flock, black beauty sleeve and Certificate of Authenticity. Face Value: 50 cents Mintage: 2,500 Composition: 99.99% Gold Weight (g): 1.27 Diameter(mm): 13.92 Finish: Proof. For in-person pick-up we also accept cash or Interac. Thank you for looking. The item “2011 Canadian 50-Cent Orca Whale 1/25 oz Pure Gold Coin” is in sale since Friday, June 5, 2020. This item is in the category “Coins & Paper Money\Bullion\Silver\Coins”. The seller is “jandm-coin-jewellery” and is located in Vancouver, BC. This item can be shipped to Canada, United States.