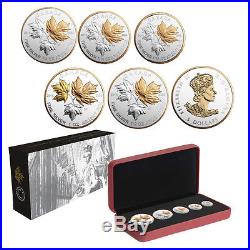 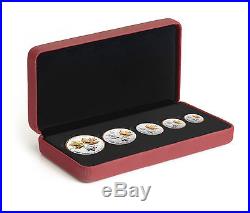 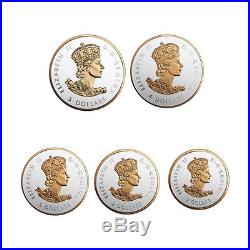 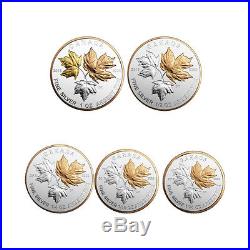 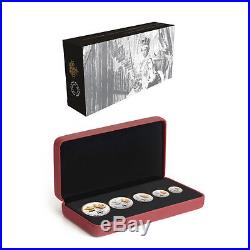 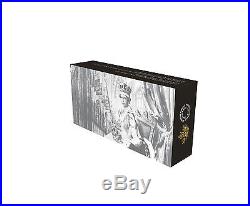 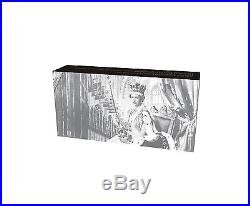 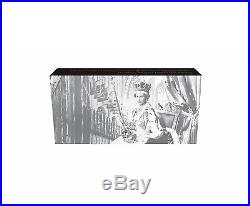 UNIQUE: The one-ounce coin in the set features the edge lettering: LONGEST REIGNING SOVEREIGN. During my lifetime, I have been a witness to this country for more than half its history since Confederation. I have watched with enormous admiration how Canada has grown and matured while remaining true to its history, its distinctive character and its values. Her Majesty Queen Elizabeth II, July 1, 2010. For over six decades, Her Majesty Queen Elizabeth II has served as an enduring and beloved symbol of duty, service and continuity. The Crown of Canada, personified by Her Majesty The Queen, is central to our system of government and functions as the ultimate guardian of our democratic rights and freedoms that have evolved under constitutional monarchy flowing from Magna Carta in 1215. The Royal Canadian Mint proudly pays tribute to Her Majesty’s historic Canadian reign of service, dedication to and affection for this country and its citizens with a set of coins that brings together two symbols that are intrinsic to our national identity and pride. Since ascending the throne in 1952, Her Majesty Queen Elizabeth II has not only witnessed but actively participated in decades of change and growth taking place in Canada, which has celebrated milestones ranging from the launch of our first satellite to the selection of a new national flag. A beautiful gift for a monarchist! FEATURES EDGE LETTERING: Your one-ounce coin in the fractional set features edge lettering that reads LONGEST REIGNING SOVEREIGN / SOUVERAIN AU PLUS LONG RÈGNE. YELLOW AND PINK GOLD PLATING ON ONE OUNCE COIN: In addition, on your one-ounce coin, yellow and pink gold plating was added, creating a beautiful contrast to the silver while enhancing the precision engraving. PINK GOLD PLATING: The other coins in your set have pink gold plating, which still creates a beautiful contrast to the silver while enhancing the precision engraving. FEATURES 1952 EFFIGY: Lending historical context to this celebration of Her Majesty’s reign is the 1952 effigy of Her Majesty Queen Elizabeth II wearing the Imperial State Crown on the obverse. The reverse proof finish gives the leaves a beautiful, natural shine against the frosted background. A valuable addition to any nature-, Canadiana-, fractional- or monarch-themed collection. All five coins feature a reverse design by Canadian artist Donna Kriekle that showcases Canada’s beloved symbol: the iconic maple leaf. Recreating the leaf’s appearance in a natural setting, three different sizes of maple leaves are joined at the stem and gently splay out to fill the entirety of the reverse. Each leaf’s distinctively serrated edge and deep veins are given a life-like quality by meticulous engraving, which shines brilliantly thanks to the reverse proof finish against the frosted background; yet, it is the addition of pink and yellow gold plating to the reverse of the one-ounce coin that proves to be particularly striking. Within the one-ounce coin’s pink gold-plated rim, the largest of the three leaves is resplendent with pink gold plating that adds an eye-catching element to the silver design; this pink gold plating is further complemented by the addition of yellow gold plating to the left-most leaf, which creates a beautiful contrast above the smaller silver leaf and is evocative of the maple’s colourful transformation each fall. The obverse pays tribute to the historic reign of Her Majesty Queen Elizabeth II with a recreation of the 1952 effigy of Her Majesty wearing the Imperial State Crown (worn at her Coronation) along with edge lettering on the one-ounce coin that reads LONGEST REIGNING SOVEREIGN / SOUVERAIN AU PLUS LONG RÈGNE. Each additional coin is enhanced with pink gold plating on the largest of the three leaves, the effigy and the rim. The coins are presented in a clamshell case with a custom outer box showing an image of Her Majesty on her Coronation day, wearing the Imperial State Crown shown on each of the coins. Your coins are encapsulated and presented in a Royal Canadian Mint-branded maroon clamshell with a graphic beauty box. 99.99% pure silver. The item “2016 Canadian Silver Maple Leaf Fractional Coin Set A Historic Reign” is in sale since Thursday, August 10, 2017. This item is in the category “Coins & Paper Money\Coins\ Canada\Commemorative”. The seller is “patrioticmint” and is located in Cedarhurst, New York. This item can be shipped to United States, Canada, United Kingdom, Denmark, Romania, Slovakia, Bulgaria, Czech republic, Finland, Hungary, Latvia, Lithuania, Malta, Estonia, Australia, Greece, Portugal, Cyprus, Slovenia, Japan, Sweden, Indonesia, Thailand, Belgium, France, Hong Kong, Ireland, Netherlands, Poland, Spain, Italy, Germany, Austria, Singapore, Switzerland, Norway, Saudi arabia, Ukraine, United arab emirates, Qatar, Kuwait, Bahrain, Croatia, Malaysia, Brazil, Chile, Colombia.