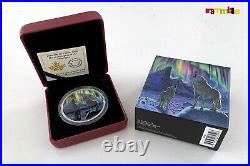 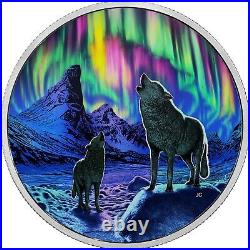 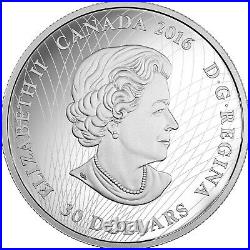 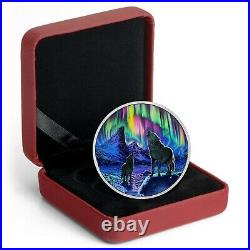 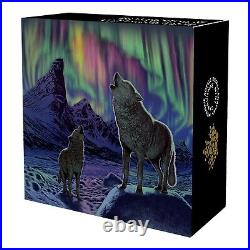 For sale is the 2 oz. Fine Silver Glow-in-the-Dark Coin – Northern Lights in the Moonlight from the Royal Canadian Mint. In Canada’s far-northern latitudes, where solitude and beauty meet, nature takes centre stage with a celestial light show that once seen, is certainly not forgotten. The sight of the aurora borealis is both mystical and mesmerizing as shimmering waves of dream-like colours dance overhead, weaving their way across the star-studded sky. Joining in with a chorus of their own, wolves pierce the silence of the night with a howl that seems to linger in the crisp air. Whether it is directed at the pack, the moon or the aurora itself, this haunting cry of the wild further heightens the sense of awe felt by those who bear witness to this colourful opus, and envy in others who long to experience it. In the natural world, the aurora borealis occurs when charged particles emitted by a solar flare collide with the atoms in Earth’s atmosphere, creating bursts of light called photons. When enough photons are released, the result is a luminous mix of green, red, yellow and orange colours that light up the dark night sky. BEST VIEWED IN THE DARK! The full effect of the coin is best viewed in the dark after placing it in a light source for 30 to 60 seconds. This enhances the ethereal quality of the aurora borealis by adding a varying intensity of green, yellow, pink and orange hues, while recreating the soft glow of a moonlit night on the snow-covered landscape below. CAPTURES THE MAJESTIC BEAUTY OF THIS NORTHERN PHENOMENON! Multi-coloured, glow-in-the-dark technology adds a dazzling radiance of varying intensity to the aurora borealis and casts a glow on the howling wolves in the Arctic landscape. 99.99% PURE SILVER! The coin is crafted from 99.99% pure silver with a limited mintage of 4,000 worldwide. The coin is encapsulated and presented in a custom clamshell with a graphic beauty box. The package will be securely padded, packed and fully insured. Please look at my listings for other fine coins from the Royal Canadian Mint. This item is in the category “Coins & Paper Money\Coins: Canada\Commemorative”. The seller is “rammble” and is located in this country: CA. This item can be shipped to United States, Canada.