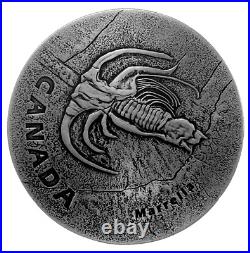 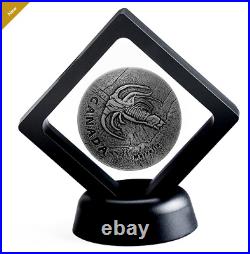 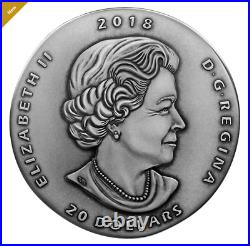 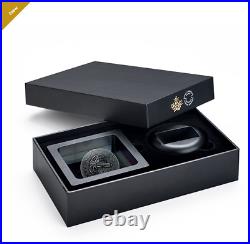 FINE SILVER COIN ANCIENT CANADA: MARRELLA. The second of two new coins added to our wildly popular Ancient Canada series! A brand-new, unused, unopened, undamaged item in its original packaging (where packaging is applicable). EACH ONE IS UNIQUE! Nicknamed the “lace crab, ” Marrella splendens and its curving spines have left an unmistakable imprint on our rocks-and on this splash-struck coin! The latest addition to the Ancient Canada series, the Cambrian arthropod is the most abundant species found in Canada’s fossil-rich Burgess Shale, where hundreds of thousands of diverse specimens provide us with a window to ancient life. BACK BY POPULAR DEMAND! The second of TWO new coins added to our wildly popular Ancient Canada series, which had collectors clamouring for more! EACH ONE IS UNIQUE: Struck using an old coin-minting technique, each coin may vary in size: it may be larger or flatter, but it will always have a minimum diameter of 38 mm! Your coin does NOT have a rim: instead, the 99.99% pure silver was allowed to “spill” out to give this coin a slightly irregular shape-just like an ancient Roman coin! Verified by the Royal Tyrrell Museum of Palaeontology, the design features precision engraving that realistically mimics the timeworn look and feel of fossils embedded in sandstone. Adding to the engraved textural details, a beautiful patina finish gives the coin an antiqued appearance that reflects the series’ theme, while the prehistoric-looking font adds to the “lost in time” feel of it all! The antique finish is sealed in lacquer, which should minimize the appearance of fingerprints if the coin is accidentally removed from its frame. The reverse design is based on fossils curated at the Royal Tyrrell Museum of Palaeontology in Drumheller, Alberta, and has been reviewed for scientific accuracy by palaeontologists at the Museum. It features a near life-sized reproduction of Marrella splendens, a marine arthropod from the Middle Cambrian period (505 million years ago), whose curving spines and wedge-shaped head are among its most distinguishing features. A carefully sculpted rock texture fills the field and surrounds the precision-engraved fossils, resulting in a more true-to-life rendering of the Marrella specimen recovered from the Burgess Shale Formation. While the rimless coin’s unique shape is the product of an old coin-making technique, the antiqued look of a patina finish adds to the design’s “ancient” look and feel, which extends to the prehistoric-looking font on the reverse and obverse. The obverse features the effigy of Her Majesty Queen Elizabeth II by Susanna Blunt. Canada: A Cambrian treasure trove. A UNESCO World Heritage Site, the Burgess Shale is one of the world’s most famous Cambrian fossil sites. In fact, the rocks in Yoho National Park date back to one of the most important events in Earth’s timeline, the Cambrian Explosion, which saw a “burst” of evolution among multi-cellular organisms-the distant ancestors to today’s major animal groups (phyla). The importance of the Burgess Shale lies within the dark mudstone, which has preserved hundreds of thousands of soft-bodied organisms from the mid-to-late Cambrian Period (505-485 million years ago). This represents an exceptional find, for soft tissue normally decays before fossilization can begin. Buried by mudslides and successive layers of sediment, these specimens were protected by the oxygen-depleted conditions that prevented complete decay; compressed over time and re-discovered in the early 20th century, they have helped fill some of the gaps in our fossil record, and provided us with an extraordinary window to ancient life. Most of the Burgess Shale specimens of Marrella have been recovered from the Phyllopod bed in the Walcott Quarry, so-named for the palaeontologist who first discovered the fossils in 1909. While the genus Marrella was named after a palaeontologist Dr. John Marr, the species name splendens means “bright” or “brilliant” in Latin-this seems fitting, since evidence indicates Marrella likely had a colourful iridescent sheen to it! This arthropod was initially described as an unusual trilobite. A later study in the 1970s concluded its antennae were too numerous and leg segments too few for it to be a trilobite (like the Ogygopsis featured on our second Ancient Canada coin). Marrella’s legs also differ from crustaceans, which possess three pairs of legs behind the mouth-a defining characteristic that Marrella lacks! There is no documented evidence that Marrella possessed eyes. Similar to a modern-day crustacean, Marrella likely used its antennae as a sensory organ to locate food in its marine ecosystem, where it fed on organic matter in the water and dredged up from the ocean floor! Since the coin’s irregular shape won’t fit within a typical capsule, we’re taking the unprecedented step of packaging it in a ready-to-display floating frame! Measuring 80 mm x 80 mm x 34 mm, this framed presentation makes for one-of-a-kind wall art and a sure conversation piece-it will seem like the fossil is embedded in your wall! Plus, the coin’s antique finish is sealed in lacquer and has the side benefit of minimizing the appearance of fingerprints, should the coin be removed from its frame. Composition 99.99% pure silver. Weight 31.39 g. Artist Image based on fossil specimen curated at the Royal Tyrell Museum (reverse), Susanna Blunt (obverse). Packaging Floating frame with black beauty box. Finished Size 160 mm x 101 mm. This item is in the category “Monnaie\Pièces – Canada\Commémoratif”. The seller is “alexsilvercoins” and is located in this country: CA. This item can be shipped worldwide.