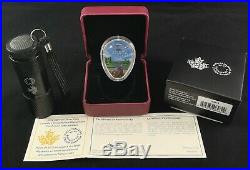 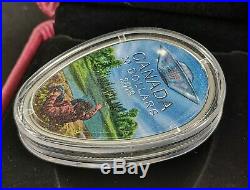 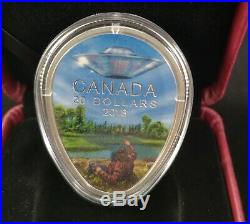 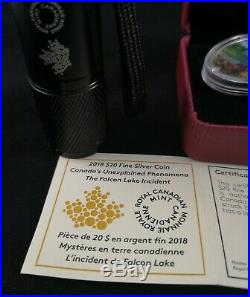 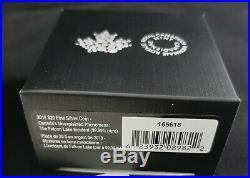 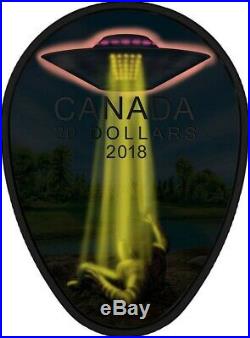 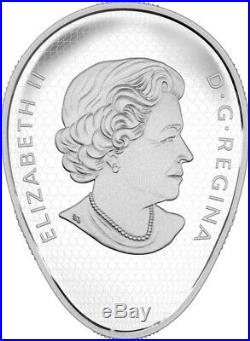 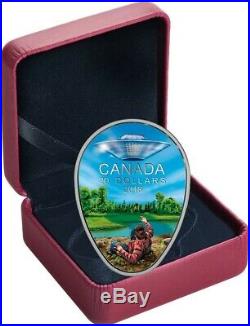 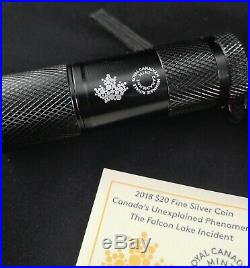 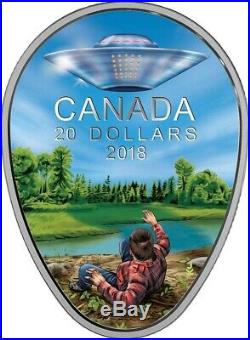 Mint condition, comes with original box, clam shell case, certificate of authenticity, and black light flash light. Item Description provided by the Royal Canadian Mint. Commemorates Canadas most famous UFO sighting! Includes a black light flashlight! It is one of Canadas most famous UFO encounters! According to Stefan Michalaks account, two glowing objects descended from the sky on May 20, 1967, near Falcon Lake, Manitoba, where one landed close enough for him to approach. When the craft suddenly took flight, its emission set Michalaks clothes ablaze, leaving him with mysterious burns and an unusual tale to tell. Your coins otherworldly shape is the perfect fit for such a story as the colourful coin captures the imagination as it recounts the Falcon Lake Incident, with black light-activated features to add a glow to the craft. The blast that knocked Michalak to the ground! If you enjoy UFO stories, then this coin is for you! FIRST SHAPED COIN OF ITS KIND TO FEATURE GLOWING ELEMENTS! Your coin is the first shaped coin of its kind to include photo-luminescent elements! Included with your coin is a black light flashlight that activates the glow-in-the-dark features, which add a red and purple glow to the craft (as per Stefan Michalaks account) and a yellow one to the blast. An exhilarating retelling of one of Canadas many fascinating stories of unexplained phenomena a story that captures the imagination and seemingly defies explanation! AN UNUSUAL SHAPE FOR A STRANGE ENCOUNTER! Your coins ovoid shape adds a curious twist to this re-telling of a mysterious eventone that fuelled speculation about the origins of the craft and the possibility of extraterrestrial visitors. A full application of vibrant colour over engraving results in an unforgettable scene, one filled with textural details that make this a superbly crafted example of visual storytelling. 99.99% PURE SILVER! Your limited collectible is set apart by an unusual theme and a glowing designa sure conversation-starter and an enthralling addition to your collection! Regardless of special packaging, the Royal Canadian Mint certifies all of its collector coins! Only 4,000 coins will be made worldwideorder today as your coin is a limited work of art in its own right and highly collectible! Designed by artist Joel Kimmel, your coin is based on Stefan Michalaks account of what transpired on May 20, 1967, near Falcon Lake, Manitoba. A full application of colour re-creates the springtime colours of the place where Michalak saw two objects appear in the midday sky. Based on the witnesss descriptions and sketches, the oval-shaped UFO on the reverse has a steel-like appearance as it hovers above him. Black light-activated features complete the story by mimicking the distinctive red glow described by Michalak, while adding a yellow hue to the blast of hot air or gas that knocked the amateur prospector on his back and left him with mysterious burn marks. The reverse includes the engraved word CANADA, the face value 20 DOLLARS and the year 2018. The obverse features the effigy of Her Majesty Queen Elizabeth II by Susanna Blunt. Around midday on May 20, 1967, amateur prospector Stefan (Stephen) Michalak was on the hunt for precious metals in Whiteshell Provincial Park when he suddenly noticed two strange objects in the sky. Both glowed with an intense red and glare as they descended from the sky; one abruptly left the scene, but the other landed roughly 50 metres away from Michalak, who moved in to get a closer look. The humming object was described as having a sulphurous smell, and it appeared to be made from a stainless steel-like material. Peering into a brightly lit opening, Michalak heard muffled sounds and tried calling out to them, only to be met with silence. He touched the seamless sides of the craft, which melted the tips of his glove; and when the UFO suddenly lifted off the ground, it emitted a blast of hot air or gas that knocked Michalak on his back, igniting his shirt and causing a grid-like pattern of third-degree burns to his chest. What was the strange craft? Where did it come from? Its a story that has more questions than answers. Michalak never claimed the craft was an alien one; neither did he waver in his account of what he had seen and experienced that day, even under the scrutiny of doctors, scientists, law enforcement officials and other authorities, who could neither corroborate nor disprove the close encounter. Canada is a hotbed of UFO activity! According to a survey, 1,131 UFO sightings were reported in Canada in 2016 but only 4% of these could not be explained. Quebec also leads all other provinces in reported UFO sightings. In 1967 (the same year as the Falcon Lake Incident), the worlds first UFO landing pad was built in St. Another famous Canadian UFO sighting took place in 1967 this time, in Shag Harbour, N. Where a series of orange lights were seen flashing in the sky before the unknown object crashed into the ocean. In 2016, a public opinion poll reported that four in five Canadians believe intelligent life exists elsewhere in the universe, and nearly half of those polled believed aliens had already visited Earth. Your coin is encapsulated and presented in a Royal Canadian Mint-branded maroon clamshell with a black beauty box. Order your Falcon Lake Incident coin today! The item “2018 UFO Falcon Lake Incident Extraterrestrial Phenomena $20 1OZ Silver Coin” is in sale since Tuesday, October 1, 2019. This item is in the category “Coins & Paper Money\Coins\ Canada\Commemorative”. The seller is “mijor-58″ and is located in Calgary, Alberta. This item can be shipped to Canada, United States.