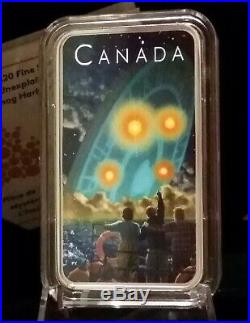 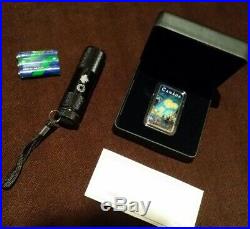 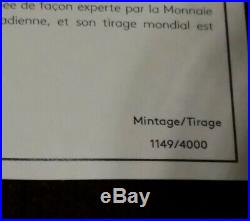 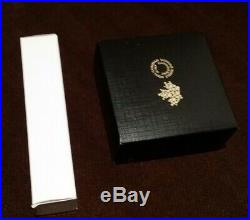 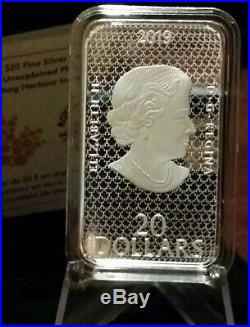 YOU ARE GETTING #1149. Ships fast from Canada! Your coin is encapsulated and presented in a Royal Canadian Mint. Branded clamshell with a black beauty box. Limited to 4000 coins worldwide. Your coin is crafted from one ounce of 99.99% pure silver. Black light technology adds a cool sci-fi glow. A BLACK LIGHT-ACTIVATED GLOW! Use the black light flashlight (included) to activate the coin’s glow-in-the-dark features. These add a sci-fi worthy element to the colourful depiction of the mysterious craft and the four mysterious lights that were spotted in the sky. 99.99% pure silver. 49.8 x 28.6. Pandora Young (reverse), Susanna Blunt (obverse). THE STORY BEHIND THIS COIN…. CREDIT TO HUFFINGTON POST. From The Huffington Post. The Royal Canadian Mint. Picked the Shag Harbour incident, a UFO sighting that took place on Oct. 4, 1967, to be featured as the second coin in its Canadas Unexplained Phenomena series. Once just a small Nova Scotia fishing community, everything changed for Shag Harbour, N. On one clear October night, according to the UFO incidents official website. Orange lights in the sky were the first thing residents noticed. The lights first flashed in a sequence and then seemed to dive towards the water of the Gulf of Maine. Witnesses said it seThe RCMP was then called to investigate. Laurie Wickens, the chair of the Shag Harbour incident society, told HuffPost Canada he was the first person who called to RCMP to tell them what he saw. He and his friends were driving when they saw the lights, according to an account he gave the Yarmouth County Vanguard. When I called the RCMP, the first thing he was to know was what I was drinking, Wickens, who would have been 18 at the time, told the Vanguard. Along with Wickens, seven people reported the incident. The RCMP investigated, first thinking that an aircraft had crashed. According to testimonies given to RCMP. From local fisherman, people assumed it might have been a plane crash because the Navy did a lot of practising in the area. The government is still trying to keep this hush-hush. Laurie Wickens, president of the Shag Harbour UFO Incident Society. But the Mounties checked in with the nearest Canadian Forces base and found that no missing aircraft had been reported that evening. Officials in Ottawa were eventually pulled into the search reports were sent to the Air Force and the Navy explaining that local officers and fishermen searched the area and found nothing. The Department of National Defence eventually conducted their own underwater search and also came up with nothing. It was called off on October 9th, five days after the object was spotted. According to the Library and Archives of Canada. The case is still described as unsolved. Emed like the light floated on the water, according to the website. The item “2019 20$ SHAG HARBOUR UFO Incident #2 1 oz Pure Silver Coin GLOW IN THE DARK” is in sale since Sunday, October 20, 2019. This item is in the category “Coins & Paper Money\Coins\ Canada\Commemorative”. The seller is “travsmom1998″ and is located in St. Catharines. This item can be shipped to Canada, United States.