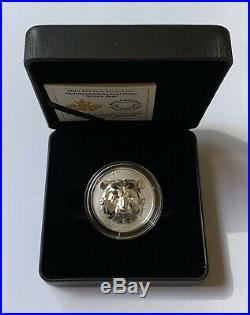 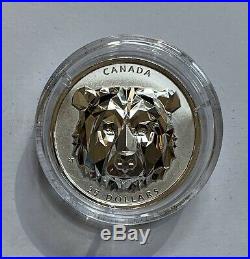 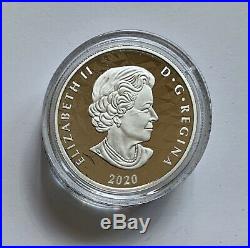 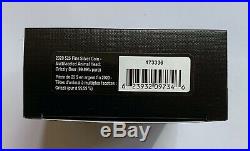 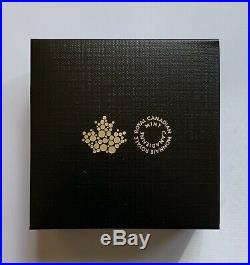 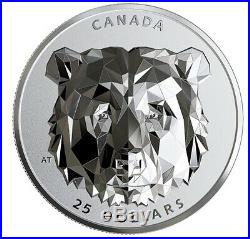 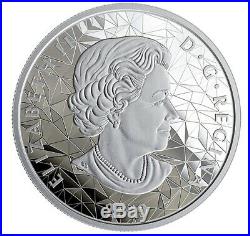 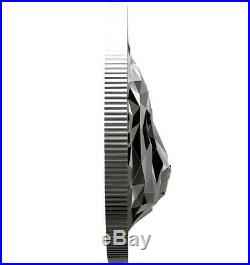 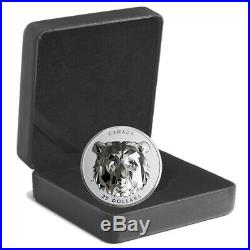 SECOND COIN IN SERIES! Capture the symbol of loyalty in a new “extra” high relief minting technique! The Multifaceted Grizzly Bear Head by Canadian artist Alex Tirabasso is the second of a 3-coin series featuring the innovative use of extraordinarily high relief (EHR). EHR goes beyond what high and even ultra-high relief techniques can accomplish and elevates the subject matter to around 6 mm. The striking visual effect of a coin that becomes more of a sculpture than a simple embossing is given an exceptional brilliance with innovative proof finish, making the silver shine like never before. This coin, featuring a multifaceted design built out of 498 polygons that are crafted in proof finish to make them sparkle like a diamond, really is an important advancement in minting. SECOND IN THE THREE COIN SERIES! Every coin features an animal head (wolf, grizzly bear, and lynx) in a new multifaceted EHR minting technique. INNOVATIVE WORLD FIRST COINING TECHNOLOGY! The multifaceted grizzly bear head coin features an ingenious approach to coin design. This second issue in the 3-coin series is the second proof-quality coins struck with extraordinarily high relief (EHR)a new term in the world of minting. EHR is defined by an impressive relief that reaches to around 6 millimetres on a coin of only 36 millimetres in diameter and 1 oz. Ultra-high relief coins barely reach 2 millimetres of height and standard relief coins remain almost flat in comparison. The grizzly bear head’s multiple facets, composed of 498 polygons, are crafted in proof finish to reflect light from various angles. The result is a coin that sparkles like a diamond. The highest quality proof finish combined with the EHR technique gives it an unequaled brilliance and sharpness, making it a world first coin of its kind. A lightly frosted background accentuates the sparkle of the central main design, giving its already dazzling subject even more emphasis. On the obverse, multiple light-relief facets provide similar luminous, reflective effect. The exceptional three-dimensionality of extraordinarily high relief allows the grizzly bear head to elevate mere embossing to a sculpture faithful to the anatomical proportions of an actual bear head. The relief is so extreme and pronounced that the modeling and tooling work had to be approached in an unorthodox manner. The engravers had to adapt their normal coin modeling procedures, CNC machining strategies and tool polishing methods to accommodate such an extreme relief. A DESIGN LIKE NO OTHER! Thanks to the ingenious EHR technology, the grizzly bear head coin design is no longer just an embossing, it is a sculpture built upon your coin. This multifaceted coin is a tribute to one of the most prominent spiritual guides on Canadian soilthe grizzly bear. A PIONEER’S WORK! Alex Tirabasso, the coin’s artist, has been a pioneer in introducing rendering and multimedia tools to produce highly realistic images for the Royal Canadian Mint. The grizzly bear head coin is one of his new ventures into the innovation of minting. The Royal Canadian Mint certifies all of its collector coins. Limited to 2,500 coins worldwide. Your coin is crafted from one ounce of 99.99% pure silver. The reverse sculpture by Alex Tirabasso features a multifaceted grizzly bear head built out of 498 polygons. The three-dimensional form protrudes from the flat coin, invoking both nature and geometry in its execution. The extraordinarily high relief plays an integral part of the design, introducing the coin among the first of its kind in the worldsharp, brilliant and doing away with the conventional flatness of minting. The brown bear is one of the largest carnivores in North America, measuring up to three metres in length. They can also weigh up to 600 kg! Unlike other mammals that can reproduce multiple times per year with plentiful litters, bears usually have only a couple cubs once about every three years and carry them for six to nine months, almost like humans. Grizzlies can hibernate for up to seven months per year. They hunt actively in preparation and stack up food reserves, then enjoy a long nap during which they do not eat nor defecate. Your coin is encapsulated and presented in a Royal Canadian Mint-branded clamshell with a black beauty box. The item “2019 Canada Multifaceted Animal Head Grizzly Bear $25 1oz Silver Coin” is in sale since Thursday, October 17, 2019. This item is in the category “Coins & Paper Money\Coins\ Canada\Commemorative”. The seller is “destinyroberts” and is located in San Ramon, California. This item can be shipped to United States, Canada, United Kingdom, Denmark, Romania, Slovakia, Bulgaria, Czech republic, Finland, Hungary, Latvia, Lithuania, Malta, Estonia, Australia, Greece, Portugal, Cyprus, Slovenia, Japan, China, Sweden, South Korea, Indonesia, Taiwan, South africa, Thailand, Belgium, France, Hong Kong, Ireland, Netherlands, Poland, Spain, Italy, Germany, Austria, Bahamas, Israel, Mexico, New Zealand, Philippines, Singapore, Switzerland, Norway, Saudi arabia, Ukraine, United arab emirates, Qatar, Kuwait, Bahrain, Croatia, Malaysia, Brazil, Chile, Colombia, Aruba, Brunei darussalam, Ecuador, Egypt, Guadeloupe, Iceland, Jordan, Cayman islands, Macao, Viet nam, Uruguay.