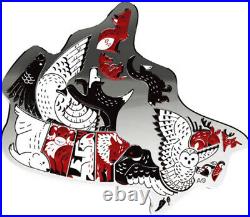 We all view the world in our own unique way. And sometimes, we’re inspired to see things in a new light, which gives shape to new ideas-like the first ever Canada-shaped coin! This proudly patriotic piece is our latest innovation. Inspired by Canada’s geography, the coin’s contour wraps around the edges of the colour-over-engraved map of Canada, which is every bit as extraordinary as its 99.99 % pure silver canvas. Much like our provinces and territories, Canada’s animal icons come in different sizes and shapes. And they are the ones who give shape to our map of Canada. These bird and mammal mascots are uniquely suited to their respective homes, and they reflect who we are as a people-whether it’s Nunavut’s Canadian Inuit dog or Ontario’s common loon. A stunning re-imagining of the map of Canada! Order your coin today! Be the first to own a Canada-shaped coin! This 99.99 % pure silver coin features a unique shape that follows the contour of our map of Canada on the reverse. CANADA’S WILDLIFE HAS TAKEN OVER! Our map of Canada gets its inspiration from nature, with an iconic Canadian bird or mammal forming each province and territory. Colours (red, black, and white) have been applied to the finely engraved elements for a more illustrative style. A FUN WAY TO CELEBRATE CANADA! It’s not just about geography! This design captures some of Canada’s spirit, too. Instead of traditional portraits of these animals, the fun-filled design plays up some of their features, traits or behaviours-like the gyrfalcon extending its wing to form part of the Arctic archipelago, or the Kermode bear that is slumped over to form the Kootenay Rockies with its nose. INCLUDES SERIALIZED CERTIFICATE: The Royal Canadian Mint certifies all of its collector coins. 99.99 % PURE SILVER COIN: NO GST/HST. Designed by Alisha Giroux, your coin is a re-imagining of the map of Canada, with stylized birds or mammals forming the shape of each province and territory it represents. From left to right, these icons of the Canadian wilderness include: a raven (Yukon), Kermode bear (British Columbia), gyrfalcon (Northwest Territories), bighorn sheep (Alberta), white-tailed deer (Saskatchewan), Canadian Inuit dog (Nunavut), plains bison (Manitoba), common loon (Ontario), snowy owl (Quebec), chickadee (New Brunswick), osprey (Nova Scotia), blue jay (Prince Edward Island), and woodland caribou (Newfoundland and Labrador). The obverse features the effigy of Her Majesty Queen Elizabeth II by Susanna Blunt. Having always seen animals and other creatures in the provincial shapes that make up my country, I expanded on this idea to create an illustrated map of Canada. Each province and territory is reimagined as an animal or bird, all while keeping true to the shapes and borders. It’s a surreal experience to see your artwork minted onto a coin, and I’m immensely grateful for the opportunity. Alisha Giroux, Artist. The beaver is the animal that represents all of Canada. It became a symbol of our sovereignty in 1975. Of all the species featured on this coin, the Kermode (or spirit) bear and the plains bison are the two largest species in real life. The friendly little chickadee that is a singing symbol of New Brunswick! Your coin is encapsulated and presented in a Royal Canadian Mint-branded clamshell with a black beauty box. Order your coin today. This item is in the category “Coins & Paper Money\Coins: Canada\Commemorative”. The seller is “gatewestcoins” and is located in this country: CA. This item can be shipped to Canada, United States.