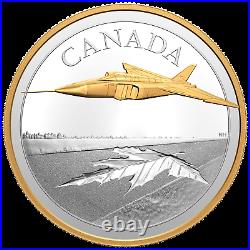 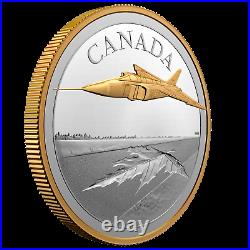 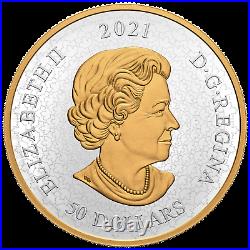 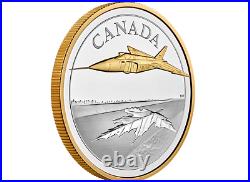 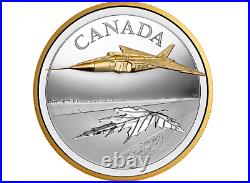 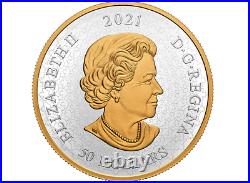 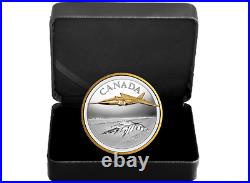 Pure Silver Coin – The Avro Arrow. The Avro Arrow lives on in our hearts, and on this 5 oz. It was a made-in-Canada marvel that was ahead of its time. Designed to fly higher and faster than any other aircraft in the 1950s, the Avro CF-105 Arrow put Canada on the cutting edge of aviation technology. Despite the project’s cancellation in 1959, the Arrow’s legacy endures. And on this 5 oz. Fine silver coin, we imagine the supersonic fighter jet taking to the skies once more, while on the ground, its shadow represents those who took Canada’s spirit of innovation to new heights. A symbol of Canadian innovation and ingenuity, the Avro Arrow lives on in our hearts and on this STUNNING 5 oz. Celebrate Canadian innovation and ingenuity with this 5 oz. Fine silver coin, which highlights the story of the Avro CF-105 Arrow. A TRIBUTE TO THE INNOVATORS! Our depiction of the Arrow casts a uniquely shaped shadow on your coin’s reverse. It’s a powerful tribute to the Canadians who designed and built the most advanced fighter jet of its time. Selective gold plating adds a dazzling gleam to our finely engraved homage to the Arrow. It’s an upscale feature that gives you the best of both worlds, silver. Gold, and it creates a striking contrast. Your coin is crafted from 5 oz. Of 99.99% pure silver and features a mirror-like proof finish for maximum shine. Only 1,000 of these coins are available worldwide. The Royal Canadian Mint certifies all of its collector coins. Design: Designed by Canadian artist Neil Hamelin, your coin’s reverse is an artistic tribute to Canada’s most famous aircraft, the Avro CF-105 Arrow. The gold-plated supersonic interceptor jet appears to be too fast and too powerful to be contained on the reverse, where a unique perspective emphasizes its sleek profile. On the runway, the maple leaf-shaped shadow pays homage to the innovators who designed and built the iconic Arrow, which was, and remains, the pride of Canada. The obverse features a maple leaf pattern and the effigy of Her Majesty Queen Elizabeth II by Susanna Blunt. Flying high: In 1953, A. Was commissioned to develop a supersonic interceptor that would bolster North America’s air defences during the Cold War. Production began at the company’s facilities in the town of Malton, Ontario, and on October 4, 1957, the first Arrow, RL-201, was unveiled to great fanfare. After a successful first flight on March 25, 1958, four more prototypes were completed, plus one Arrow Mk. The twin-engine, delta-winged Arrow was hailed as a technological triumph; it was the first production aircraft to adopt a fly-by-wire flight control system, while the newly developed Iroquois PS-13 turbojet engine would have allowed it to fly at a speed exceeding Mach 2twice the speed of sound. But the program was cancelled on February 20, 1959. All prototypes, models, plans and equipment were ordered destroyed, though some surviving pieces can be found in Canadian museums. Many of the Canadian engineers who worked on the Arrow project went on to play important roles in other aviation projects and in the American space program. What’s the largest surviving piece of the Avro Arrow? The nose section of RL-206, which was 98 percent complete when work stopped on the Arrow program. When the Arrows were disassembled in 1959, this section found its way to the Institute of Aviation Medicine in Toronto, where it was used as a pressure chamber. In 1965, it was donated to the National Aeronautical Collection, which became the National Aviation Museum in 1982 and is now the Canada Aviation and Space Museum in Ottawa, Ontario, where the nose section is currently on display. Several more Arrow artifacts have resurfaced in the last few years, including several models that have been recovered from the bottom of Lake Ontario. Packaging: Your coin is encapsulated and presented in a Royal Canadian Mint-branded clamshell with a black beauty box. QUALITY DOES MAKE A DIFFERENCE! The item “2021 Canada 5 oz. Pure Silver Coin The Avro CF-105 Arrow” is in sale since Thursday, July 1, 2021. This item is in the category “Coins & Paper Money\Coins\ World\Commemorative”. The seller is “kiemss” and is located in Edmonton, AB. This item can be shipped worldwide.