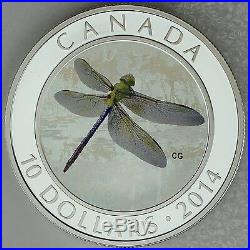 Pure Silver Hologram Coin. All coins offered in this listing are unsearched! (see Additional Information below). All of our Canadian coins are acquired directly from the Royal Canadian Mint – The counterfeiting of numismatic coins, and the sale of stolen coins, are serious problems for coin collectors and dealers. Unlike many other coin dealers. To protect against these risks, we do not sell’second-hand’ coins. All of our Canadian coins are stored in a climate controlled, smoke-free vault. Maximum Mintage 10,000. Composition fine silver (99.99% pure). Finish hologram with color. Weight (g) 15.87 1/2 troy oz. Certificate serialized (serial numbers will vary). Face value 10 dollars (a legal tender Canadian coin). Artists Celia Godkin (reverse), Susanna Blunt (obverse). One of the loveliest, largest, and most widespread dragonfly species in Canada is Anax junius , commonly known as the Green Darner. Both males and females range in length between 70 and 80 millimeters and have a wingspan of 100 to 120 millimeters. The Green Darner’s common name is rooted in its bright green body and long blue abdominal region marked with a black line along its entire length that looks much like a darning needle. The Green Darner has large green or brown eyes that join at the top of its head, extending the dragonfly’s scope of vision to nearly 360 degrees. The area just in front of the conjoined eyes bears a distinctive dark “bull’s-eye” marking. Green darners are one of the few dragonfly species in North America known to be migratory. They travel south from many regions of Canada between late August and November, returning the following year between March and June to lay their eggs. Like all dragonflies, green darners are amazing aerial hunters that can fly at incredible speeds. They use this speed and their unusual eyesight to catch prey on the wing. Their prey includes black flies, deer flies, mosquitoes, moths, butterflies, bees, and other insects. They are also entirely carnivorous in their nymph phase, feeding on aquatic insects, tadpoles, and fish eggs. Green darners are found throughout southern Canada and are common across much of North America, South America, Asia, and the West Indies. The second in the Royal Canadian Mint’s exciting new “Dragonfly” series featuring painted Canadian dragonfly species set against hologram images of their natural habitat! By holding the hologram at a 45 degree angle under the light, the dragonfly’s habitat comes to life in dimensional detail – from the vegetation along the water’s edge to the lily pads floating on the water’s shimmering, reflective surface. A beautiful gift and exquisite addition to any nature-themed or specialty coin collection. This coin has a limited worldwide mintage. Designed by Canadian artist Celia Godkin, the coin features a painted Anax junius set against a three-dimensional hologram. Rendered in finest detail, the dragonfly is presented from its right side. Its delicately veined transparent wings are fully extended as the green darner flies sprightly across a vegetation-lined pond. This presentation of the darner shows the viewer the large dragonfly’s vast wingspan, beautiful emerald-green thorax, large green eyes, and characteristic head-top bulls-eye marking, as well as its long blue “darning needle” abdomen. Its preferred summer breeding habitat is uniquely depicted in the hologram background; by capturing color from light, this holographic image offers added dimensionality and movement to the reverse image. Tall vegetation lines the water’s edge in the top portion of the background, while below, nearby trees are reflected on the pond’s mirror-like surface. In the center, lily pads float on the shimmering water’s surface – a welcome respite for the dragonfly on a warm summer day. Each coin is encapsulated and presented in a Royal Canadian Mint-branded maroon clamshell with a protective sleeve. Bezel is made with sterling silver (92.5% silver). Fits 34 mm coins! 18 inch nickel plated snake chain included. Makes an ideal gift to someone special any time of the year your Pendant Necklace-Making Kit (coin not included) is a unique way to turn your stunning 34 mm diameter coin into a stylish conversation piece. Only three available Availability is subject to prior sales. Check out my other items. Be sure to add me to your favorites list. All of the coins offered in this listing are unsearched. Many coin dealers search all coins when they are received from the Mint. They “cherry-pick” the best coins. Then submit them to be graded, certified, and slabbed by PCGS, NGC, ANACS, etc. When a dealer searches coins, those that they sell in original Mint packaging are only lesser quality coins. Photos: When a listing offers multiples of the same coin, one coin is picked at random and photographed. Since all coins offered in that listing are essentially identical, the coin photographed is representative of all coins offered. Surface areas that appear black on some proof coin photos are actually highly polished, mirror-bright metal reflecting the color of the camera. We often include proof coin photos with the coin slightly tilted to better depict the mirror bright surfaces. However, tilting the coin may resulting one side being slightly out of focus. Whenever possible, we use actual photos of our coins, rather than just stock artwork from the Mint. We frequently update and upgrade the photos that appear with our listings, using improved cameras and lenses and better lighting. We will honor your requests for additional photos as quickly as our schedule permits. The item “Canada 2014 $10 Green Darner, Dragonflies #2, 1/2 oz. Pure Silver Hologram Coin” is in sale since Friday, June 13, 2014. This item is in the category “Coins & Paper Money\Coins\ Canada\Commemorative”. The seller is “okranchlandandcattlecompany” and is located in Lewisville, Texas. This item can be shipped to United States, Canada, United Kingdom, Denmark, Romania, Slovakia, Bulgaria, Czech republic, Finland, Hungary, Latvia, Lithuania, Malta, Estonia, Australia, Greece, Portugal, Cyprus, Slovenia, Japan, Sweden, Indonesia, Thailand, Belgium, France, Hong Kong, Ireland, Netherlands, Poland, Spain, Italy, Germany, Austria, Bahamas, Singapore, Switzerland, Norway, Saudi arabia, Ukraine, United arab emirates, Qatar, Kuwait, Bahrain, Croatia, Malaysia, Brazil, Chile, Colombia, Viet nam, Uruguay, China, South Korea, Taiwan, South africa, Israel, Mexico, New Zealand, Philippines, Aruba, Brunei darussalam, Ecuador, Egypt, Guadeloupe, Iceland, Jordan, Cayman islands, Macao.