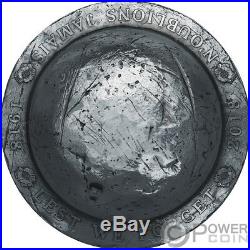 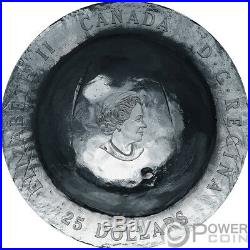 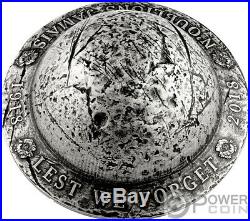 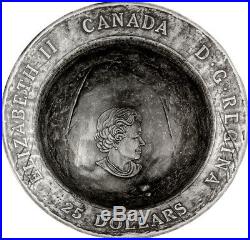 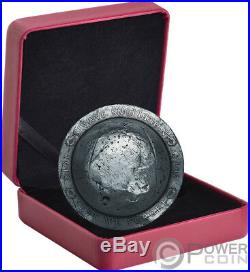 This beautiful 1 Oz Silver coin commemorates the 100th Anniversary of the Armistice with a symbol of remembrance worn by Canadian combatants in the First World War. The coin features a wonderful helmet shape, has a beautiful design and comes in an elegant case, along with the Certificate of Authenticity. Limited mintage to 6.500 pieces worldwide. The reverse of the coin Resembles the 1916 Mark I model worn by Canadian combatants, the combat helmet-shaped coin is the result of a careful collaboration between Royal Canadian Mint engravers and engineers. The coins unprecedented, extreme curvature allows for a realistic re-creation (on a much smaller scale) of the bowl-shaped headgear issued to Canadian troops and all British Empire forces in 1916. The reverse provides a view of the top of the now-iconic steel helmet, whose battle-worn appearance is the result of engraved cracks and markings beneath the antique finish that gives it all a distressed look. All around the reverse, the inscriptions: 1918 the year of the war, 2018 the year of issue and LEST WE FORGET the name of the coin. The obverse of the coin resembles the interior of the helmet and depicts the effigy of Her Majesty Queen Elizabeth II. All around the coin, the inscriptions: ELIZABETH II the name of the Queen, CANADA the issuing country, D·G·REGINA Dei Gratia Regina and 25 DOLLARS the face value. The item “LEST WE FORGET 100th Anniversary Silver Coin 25$ Canada 2018″ is in sale since Wednesday, October 3, 2018. This item is in the category “Coins & Paper Money\Coins\ Canada\Commemorative”. The seller is “powercoin_italy” and is located in Roma. This item can be shipped worldwide.