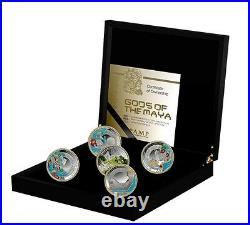 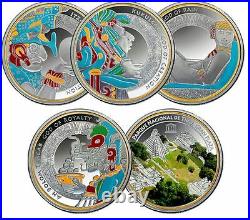 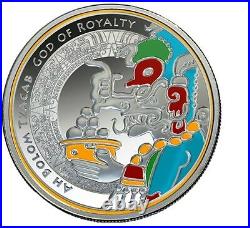 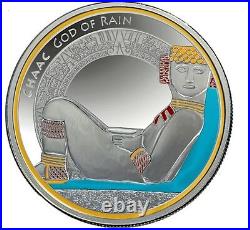 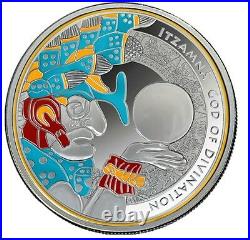 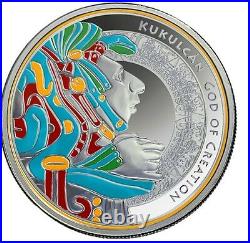 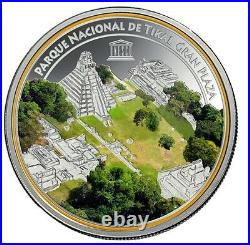 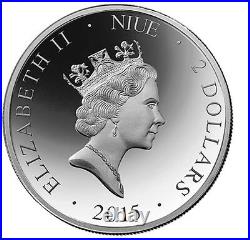 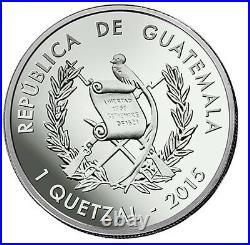 From the mints of Niue and Guatemala! A commemorative coin collection with UNESCO World Heritage Coin Centrepiece! Rare for a boxed set, the Parque Nacional de Tikal-Gran Plaza centerpiece coin is also an official addition to the UNESCO World Heritage Coin and Medal Program, which is internationally managed and implemented exclusively by Produits Artistiques Metaux Precieux (PAMP). Beautifully executed as an aerial view, the reverse side of this spectacular World Heritage coin also bears the renowned UNESCO logo as a prestigious mark of authenticity, while the obverse side carries the official effigy of the Guatemalan government. One of PAMP’s most unique coin sets to date, and the latest addition to its Mythologies of the World series, the Gods of the Maya collection is notable in several ways. The Maya worshipped countless gods and goddesses, many unique to local tribes, and with characteristics that over time merged with other ethnic deities via trade and conquest. For this outstanding collection, four deities with distinct attributes were selected due to widespread prominence throughout the diverse Maya city-states of Mesoamerica: Itzamná, god of divination and writing; Ah Bolom Tzacab, god of royalty and lineage; Chaac, god of rain, and Kukulcán, god of creation. Each god is brought to life via a multifaceted interplay of high and low relief, highly polished and frosted finishes, and thoughtful applications of brilliant color accurate to those of the ancient Maya, and made possible thanks to’Virtual Enamel,’ a new coloring process nearly identical to the finest enamel work. The gods of the Maya were inexorably linked to nearly every aspect of daily life, intensely influencing this highly sophisticated civilization’s approach to governance, astronomy, mathematics, language, and significantly, city planning and architecture. Thus, a fifth coin central to the theme represents Tikal, once a vast metropolis and former Maya capital located in the north of present-day Guatemala. Sprawling across an immense tropical rainforest and abundant with thousands of archaeological treasures, Parque Nacional de Tikal, as the area is now formally known, was declared a UNESCO World Heritage site in 1979. Inspired by deities of the diverse Mayan cultures of Mesoamerica! Coins in your set include. Itzamná, God of Divination. Ah Bolom Tzacab, God of Royalty. Kukulcán, God of Creation. Chaac, God of Rain. And the UNESCO World Heritage Coin Edition coin: Parque Nacional de Tikal, Gran Plaza. Coin designs bearing original artwork, inspired by ancient depictions of each deity. UNESCO World Heritage coin centerpiece features Tikal National Park in Guatemala. Five official legal tender coins. Did you know. Few ancient civilizations have captivated our imagination as profoundly as that of the Maya. Flourishing between AD 250-900, the Maya population numbered in the millions, and created a multitude of kingdoms and small empires, built monumental palaces and temples, engaged in highly developed ceremonies, and perfected elaborate hieroglyphic writing, mathematic and astronomical systems. Maya influence can be detected particularly in Guatemala, as well as in Honduras, Belize, western El Salvador and as far away as central Mexico. The majority of the great Mayan cities went into decline during the 8th and 9th centuries and abandoned shortly thereafter. That decline was marked by a cessation of monumental inscriptions and large-scale architectural construction. No universally accepted theory explains the collapse. However even today Maya descendents form sizable populations throughout the area, maintaining a distinctive set of traditions and beliefs resulting from the merger of pre-Columbian and post-Conquest ideas and cultures. What their ancestors left behind-colossal step-pyramids and palaces, intricately carved stelae and decorative pottery depicting fantastical gods, kings, and above all, a collective history-continue to inspire and excite humankind worldwide. Those artifacts and the cultures that crafted them form the basis for PAMP’s latest collection of legal tender coins in precisely minted silver. Packaging: Handsomely presented within a deluxe collector’s box bearing a Maya long-count calendar-medallion, the five-coin set rests within a removable presentation tray, and a certificate of authenticity and detailed story cards are also included. A paper certificate from Canadian Royal Mint that declares the coins are genuine. 99.9% pure silver. Parque Nacional Tikal Gran Plaza. This item is in the category “Coins & Paper Money\Coins: Canada\Commemorative”. The seller is “finecoin_canada” and is located in this country: CA. This item can be shipped to Canada, United States.