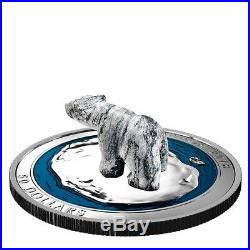 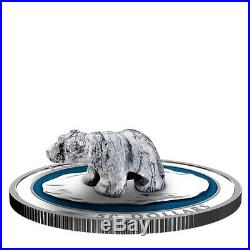 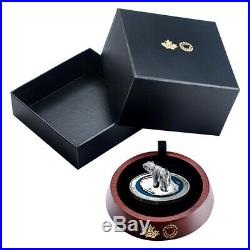 IQUE 65 mm wide. 5 oz 99.99% pure silver coin holds a polar bear hand-carved from soapstone standing on an icy silver berg in the deep blue Arctic! Note – low certificate number. Includes all original Mint packaging. 99.99% pure silver. Certificate – low certificate Number – 0126/1300. Dave Zachary (reverse), Susanna Blunt (obverse). In a landscape carved by ice and wind, the polar bear remains the unchallenged titan of the North. To those who have long inhabited the region. Represents more than survivalit is a powerful cultural figure steeped in tradition. Legends and art speak of the polar bear’s might and wisdom as a link between spiritual and natural worlds, while its unmistakable profile lends itself beautifully to sculptured works of art that capture the true essence of life on and around the Arctic ice. HAND-CARVED BY CANADIAN ARTIST DAVE ZACHARY! Rising up on the coin, each polar bear sculpture is carefully hand-carved. From Canadian soapstone by Canadian artist Dave Zachary and his team of sculptors, making each coin unique as each polar bear is not quite identical. Engraving recreates the rough edges of the ice on your coin, while translucent colour enamel adds a deep blue hue to the Arctic waters. With a 65.25 mm diameter, the coin’s surface provides a large base for the soapstone sculpture, while proof-quality 99.99% pure silver mimics the light-reflective nature of the Arctic landscape! A dome-like capsule keeps your coin safely protected from the elements. The Royal Canadian Mint certifies all of its collector coins. 99.99% PURE SILVER COIN! Only 1,300 coins will be made worldwide! The natural beauty of Northern Canada shines bright on this coin, thanks to a harmonious mix of finishing techniques and a polar bear soapstone sculpture that makes each coin unique. As it does for Arctic marine life, ice floe provides the foundation for this design: engraving provides a life-like textural effect, while a special frosting gives the snow-covered ice a more matte-like appearance. The surrounding water is a sparkling shade of blue, thanks to the application of translucent enamel over the proof finish. But the focal point is undeniably the sculptured piece that rises up from the ice floe: each polar bear sculpture has been hand-carved from Canadian soapstone by Canadian artist Dave Zachary and his team of sculptors. With its gaze fixed on what lies ahead, the polar bear cuts a formidable figure in this Arctic landscape, where it is regarded as an icon of strength and endurance. The polar bear is uniquely adapted for life at the top of the world, with thick white fur that provides both protection and camouflage. More than half of the world’s polar bear population can be found in areas along Canada’s northern coastlinefrom James Bay up to the Arctic Archipelago, and from the Yukon’s coastline to that of Newfoundland and Labrador. This immense bear spends most of its life on the sea ice that is vital to the Arctic marine environment; but as its scientific name implies. Is a natural swimmer, and won’t shy away from plunging into the water to get from one icy platform to another. Soapstone is a softer grade of rock that can have a greasy, soap-like feel to the touchhence its name. A metamorphic rock, it is largely composed of talc mixed with other minerals that cause variations in hues and markings, including pyrite crystals that can add flecks of gold! The first Canadian production of soapstone was in 1871, in the Eastern Townships of Quebec. Today, it is found in many provinces, and in some localities throughout the North. The coin is encapsulated and presented in a Royal Canadian Mint-branded wooden circular base with a black beauty box. The item “PRICE REDUCED! 2018 Polar Bear Soapstone Enamelled Prf. $50 Cdn silver coin” is in sale since Sunday, March 10, 2019. This item is in the category “Coins & Paper Money\Coins\ Canada\Commemorative”. The seller is “archi.marga” and is located in Amherstburg, Ontario. This item can be shipped worldwide.