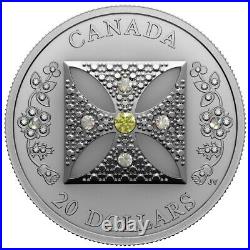 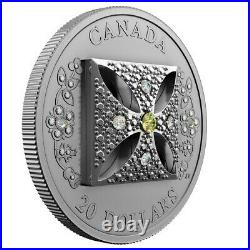 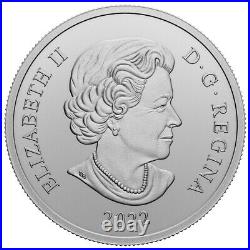 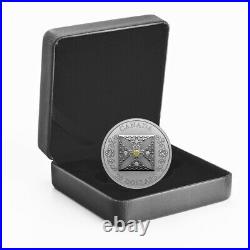 Her Majesty Queen Elizabeth II’s Diamond Diadem. The Royal Canadian Mint reserved Her Majesty’s most famous royal headpiece for the Platinum Jubilee! The Diamond Diadem is spectacular yet familiar-it’s the royal headpiece that has appeared in countless portraits since Her Majesty acceded to the throne in 1952. It is one of the most recognizable symbols of Her Majesty’s 70-year reign, and for this reason, it is the inspiration for this year’s 99.99% pure silver tribute to the Queen of Canada in her Platinum Jubilee year. The coin’s reverse features a rhodium-plated embellishment that resembles the diadem’s cross and floral sprays. Adorned with Swarovski® crystals, the arrangement sparkles brilliantly against the matte proof finish, which ensures all eyes are on this jewellery-themed design. Celebrate Her Majesty’s Platinum Jubilee with this diadem tribute. The regal Diamond Diadem is also known as the George IV State Diadem because it was originally created for the coronation of King George IV in 1821. It has since been exclusively worn by queens regnant and consort, beginning with Queen Adelaide and continuing with Queen Victoria, who designated it an Heirloom of the Crown in 1901. Its silver frame is lined with gold and set with 1,333 brilliant-cut diamonds, including a four-carat yellow brilliant at the centre of the front cross. Its narrow band is edged with pearls and surmounted by four crosses pattée and four sprays featuring a rose for England, shamrocks for Ireland and a thistle for Scotland. Designed by Canadian artist Jori van der Linde, your coin’s reverse features an artistic representation of the famous Diamond Diadem worn by Her Majesty Queen Elizabeth II. Swarovski® crystals add a diamond-like sparkle to the rhodium-plated embellishment, which resembles the diadem’s cross and the floral sprays representing the national emblems of England, Ireland and Scotland. The reverse includes the inscription “CANADA” at the top and “20 DOLLARS” at the bottom. The obverse features the date “2022” and the effigy of Her Majesty Queen Elizabeth II by Susanna Blunt. Although Queen Alexandra and Queen Mary wore the Diamond Diadem for family events, Her Majesty Queen Elizabeth II has mostly worn the Diamond Diadem on State occasions. Since her accession to the throne in 1952, Her Majesty has worn the diadem while travelling to and from the annual State Opening of (United Kingdom) Parliament, and also during the coronation procession in 1953. The diadem can be seen on the obverse of most Canadian coins issued between 1990 and 2002, when they typically featured the effigy by Dora de Pédery-Hunt. Composition: 99.99 pure silver and Swarovski® crystals. Artist: Jori van der Linde (reverse), Susanna Blunt (obverse). Embellishments such as sculptures or moving parts. Crystals, gemstones or diamonds embedded into the coin. Sculptures and/or other moving parts. Please see The Royal Canadian Mint’s FAQ. The coin comes encapsulated and presented in a Royal Canadian Mint-branded clamshell with a black beauty box. Citadel Coins Halifax, Nova Scotia Official Royal Canadian Mint Distributor. This item is in the category “Coins & Paper Money\Coins: Canada\Commemorative”. The seller is “citcns” and is located in this country: CA. This item can be shipped worldwide.